“The international community must immediately unite behind Guaidó to restore democracy,” said Canadian Prime Minister Justin Trudeau. “The time for democratic transition in Venezuela is now,” said the prime minister, who officially recognized Viera-Blanco, a Montreal-based lawyer, as the head of the interim government’s diplomatic mission in Canada, Bloomberg reports:

For too long in the oil-rich South American nation, Trudeau said, the international community has witnessed “a dictatorship willing to use force, fear and coercion to retain power. The violation of human rights and the complete disregard for the rule of law shown by the regime has been both inexcusable and unacceptable.”

The transition will be peaceful, negotiated and constitutional, according to Tal Cual.

European support for Mr. Guaidó is critically important as it could propel China to rethink its ties to Mr. Maduro, said Eric Farnsworth, vice president of Americas Society/Council of the Americas. Beijing will want to avoid being seen as one of the last international backers propping up Mr. Maduro as it tries to grow business and political relations elsewhere in Latin America, Mr. Farnsworth told the WSJ.

With the Kremlin offering to send in advisers to help embattled Venezuelan leader Maduro as the US imposes sanctions, it is clear that the US and Russia are engaging in a new sort of proxy conflict in America’s backyard, notes Alexander Gabuev, a senior fellow and chair of the Carnegie Moscow Center’s Russia in the Asia-Pacific Program:

But this is more than Vladimir Putin’s version of payback for years of US involvement in places like Ukraine and Georgia or the US’s withdrawal from the mid-range nuclear arms treaty. Russia’s policy on Venezuela is heavily influenced by Igor Sechin, the head of Rosneft, Russia’s national oil company. It is not only owed $3bn by Caracas, but also owns two offshore gasfields in the country and stakes in assets boasting more than 20m tonnes of crude. 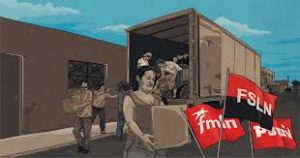 Venezuelans staged months of mass daily protests in 2017 after President Maduro stripped Venezuela’s opposition-dominated parliament of its powers. They are marching again now, demanding Maduro’s ouster. Social unrest can deepen economic woes, especially when it gets violent. Riots may destroy physical infrastructure like oil pipelines or block highways that keeps the country running. People may flee for their own safety, leaving jobs undone and critical positions unfilled. 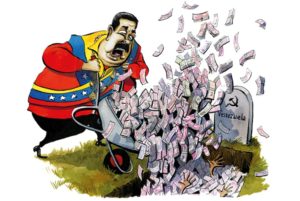 Our study found one condition that allows economies to thrive even when democracy is in decline: functioning political parties in independent legislatures, they write for the Conversation.

Those who know and love Venezuela have watched the 20 years of Chávez-Maduro with pain. Never has a rich oil economy, in the east or the west, been so completely raped by a kleptocracy masquerading as an ideology, the Guardian’s Simon Jenkins writes:

Never has socialism been so tested to destruction. It is no one else’s fault. Venezuela has had ample aid from Russia and China. It was a (relatively) peaceful and prosperous country before Hugo Chávez. He and his successor wrecked it. That they should have been backed by Lenin’s “useful idiots” in Britain’s Labour party is stupefying.