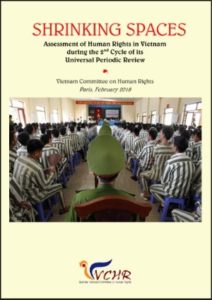 Vietnam’s Communist authorities must drop all charges against human rights lawyer Nguyen Van Dai, his assistant Le Thu Ha, and seven other members of the Brotherhood for Democracy and immediately release them, the Observatory for the Protection of Human Rights Defenders (an FIDH-OMCT partnership, supported by the National Endowment for Democracy) and the Vietnam Committee on Human Rights (VCHR) urged.

Le Thu Ha, Nguyen Bac Truyen, Nguyen Trung Ton, Nguyen Van Dai, Pham Van Troi, and Truong Minh Duc are accused of being affiliated with Brotherhood for Democracy, which was founded in April 2013 by Nguyen Van Dai and fellow activists…Members of the group conducted informal trainings on civil society, human rights, and democracy, and learned skills such as safety and security on the internet. They participated in anti-China and pro-environment protests, and in humanitarian activities such as helping victims of natural disasters and veterans with disabilities. The Brotherhood for Democracy provided legal assistance to fellow activists who were arrested and charged for their pro-democracy activities and co-signed petitions calling for democracy

and human rights in Vietnam. They also visited the family of political detainees and prisoners to show solidarity.

Since the Formosa environmental catastrophe in April 2016, there have been numerous protests in Vietnam to demand a clean environment and fair compensation for victims who lost their livelihoods. Vietnamese authorities have responded by arresting and imprisoning activists who protested, including Nguyen Ngoc Nhu Quynh, Tran Thi Nga, Ho Van Hai, Tran Hoang Phuc, Hoang Duc Binh, Nguyen Van Hoa, and many others.

“The only crime that these activists have committed is to campaign tirelessly for democracy and defend victims of human rights abuses,” said Brad Adams, Asia director at Human Rights Watch.

“It is no coincidence that the trial of these six activists is planned on the two-year anniversary of the Formosa environmental disaster,” he added. “Instead of silencing critics, the Vietnamese government should order an impartial outside assessment of its clean-up effort and deal directly with citizens in the affected areas to provide fair and transparent compensation for their losses.”