The apparent abduction, and probable murder, of the prominent Saudi journalist Jamal Khashoggi unmasked the ugly despotism behind the reformist image of the kingdom’s crown prince, Mohammed bin Salman, notes Mustafa Akyol, a senior fellow at the Cato Institute, where he focuses on the intersection of public policy, Islam, and modernity.

His death highlights a Ottoman-Saudi Islamic rift, rooted in theological and political divisions, with the latter focused on the Muslim Brotherhood, he writes for Foreign Policy:

It’s important to properly understand the contours of the dispute. The Muslim Brotherhood, a political party whose ultimate aim is to introduce sharia, or Islamic law, can be a legitimate concern for secular Arabs. Saudi Arabia, however, already implements the most rigid form of sharia and also promotes the Salafi movements around the region, which are more regressive than the Muslim Brotherhood on issues like women’s rights.

The real concern of Saudi Arabia with Muslim Brotherhood is political—that a popular Islamist movement that doesn’t recognize the absolute authority of the ruler is subversive. So, they should be crushed by force—an argument that again makes sense to hawks in the West, for their own reasons. History shows, however, that the very thing that created terrorist offshoots of the Muslim Brotherhood has been its violent repression by Arab tyrants. As experts such as Shadi Hamid argue, “normalizing Islamist parties” is in fact the only way to build Arab democracies. 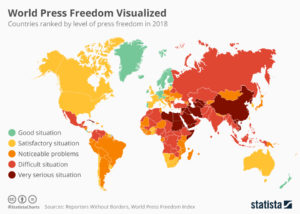 I was recently online looking at the 2018 “Freedom in the World” report published by Freedom House and came to a grave realization, Khashoggi observed. There is only one country in the Arab world that has been classified as “free.” That nation is Tunisia. Jordan, Morocco and Kuwait come second, with a classification of “partly free.” The rest of the countries in the Arab world are classified as “not free,” he wrote for The Washington Post:

The Arab world needs a modern version of the old transnational media so citizens can be informed about global events. More important, we need to provide a platform for Arab voices. We suffer from poverty, mismanagement and poor education. Through the creation of an independent international forum, isolated from the influence of nationalist governments spreading hate through propaganda, ordinary people in the Arab world would be able to address the structural problems their societies face. RTWT