Far more people around the world think China has responded well to the COVID-19 pandemic than those who think the United States has done a good job, a poll by the Alliance of Democracies Foundation showed on Monday, Reuters reports:

The survey of more than 120,000 people from 53 countries by the think tank and German polling data firm Dalia Research found that even in democratic countries, 45% of people thought their governments had limited too many freedoms during the pandemic….More than 60% of people surveyed thought China had responded well to the pandemic, while only a third around the world thought the U.S. response had been effective. 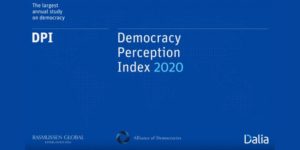 “COVID-19 is also a litmus test for democracy,” said Anders Fogh Rasmussen, chairman of the Alliance of Democracies Foundation and a former NATO secretary general. “It should act as a wake up call to democratic leaders that people want more democracy and freedom after COVID-19,” he said, speaki ng ahead of this week’s Copenhagen Democracy Summit (see below).

Beyond the cost in human lives and the economy, the pandemic has exacted a toll
on democracy, notes David J. Kramer (above), a former assistant secretary of state for democracy, human rights and labor and and co-founder of the Fukuyama Democracy Frontline Center.*

According to The Economist, more than 80 countries have granted emergency powers to the executive, in many cases with no sunset provisions. This parliamentary yielding of checks and balances may be understandable under the unprecedented circumstances we face, but it also increases the risks that such powers will be abused, he adds.

For countries in the Black Sea region, none of this is good news, though the picture is not entirely bleak, Kramer writes in ‘The Pandemic, Democracy, and the United States: Implications for Black Sea Region’, an opinion piece for The Economic Policy Research Center in partnership with the Black Sea Trust, a project of the German Marshall Fund of the United States.

Countries such as the Czech Republic, Georgia, and Latvia have fared well in combating the coronavirus and re-opening their societies, the Center for European Policy Analysis adds. While each has taken a slightly different approach, deaths and infections have remained low. Yet disinformation and criticism abound. The Lugar Lab located on the outskirts of Tbilisi is one such target, with Russian media espousing conspiracy theories that the virus originated here. The lab has countered these claims by opening its doors to the media.

Join CEPA for a discussion on the ways European countries have mitigated the pandemic, the remaining difficulties in containing the virus, and the threat disinformation poses to health care systems.

A Virtual Event
Common Crisis: Perspectives on the Pandemic from Prague, Riga, and Tbilisi

National Endowment for Democracy (NED) partner CEPA is hosting this event online. To take part in the Q&A, please register via Zoom. Please note, there are a limited number of interactive spaces available. To tune in to the livestream, participants can also watch via the CEPA Events Page, Facebook, or Twitter.

The Fukuyama Democracy Frontline Center, based in Stamba, Tbilisi, envisions a wide spectrum of freedom fighters, human rights activists and democracy advocates throughout the European and Eurasian region, coalescing around the fundamental values of democracy, rule of law, and the liberal international order. These universal values have been essential to peace and stability throughout most of the continent, and the Center sees itself as a focal point for defending and advancing the cause of freedom, democratic development and respect for human rights. Stanford University Professor Francis Fukuyama will lead the Board.