Fifty years on, there are still lessons to be learnt from the Prague Spring, the FT’s Tony Barber writes:

When Soviet tanks rolled into Czechoslovakia 50 years ago, crushing the period of liberalization known as the Prague Spring, a young photographer named Libor Hajsky captured scenes of violence and fear — as well as moments of empathy and dark humor, RFE/RL adds.

During the Cold War, Czechoslovak Documentation Center, “one of the most important exile institutions of the second half of the 20th century,” was a vital link between dissidents in Czechoslovakia and the outside world, notes Rodger Potocki, NED’s Senior Director (Europe):

The Center, a valuable archive of the samizdat (“self-published,” or underground) and other writings of Charter 77 dissidents and other Czech and Slovak 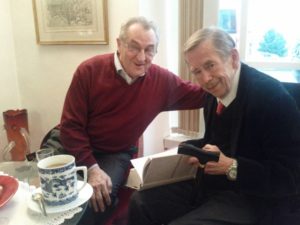 democrats, was the dream of Vilém Precan (right, with Vaclav Havel), a historian who was dismissed from his job at the Academy of Sciences and forced to emigrate after publishing the famous “Black Book,” which documented the brutal Soviet invasion of Czechoslovakia that ended the 1968 Prague Spring.

The above three lessons still matter “because of the remaking of the west’s political landscape over the past decade,” Barber adds.

“Liberalism is in retreat, the rule of law is under threat and national populism is on the rise. Transatlantic discord undermines Nato,” he adds. “The EU is short of unity, political willpower and good ideas. In some capitals, the reins of power rest in the hands of secretive, manipulative strongmen or abusive, vainglorious demagogues.”