“We need … a France that defends justice and opposes autocrats like [Russian President] Vladimir Putin,” they added, arguing that they “hope” voters choose this vision for France.

Le Pen has increased her electoral appeal since her 2017 presidential bid by taking a page from the Macron playbook, says Agneska Bloch, a senior research assistant at a D.C.-based think tank. While her far-right competitor in the race, the even more extreme Eric Zemmour, insisted on the need to transcend the traditional boundary between right and far right, Le Pen claimed that she was “not interested in the right, nor the left.” 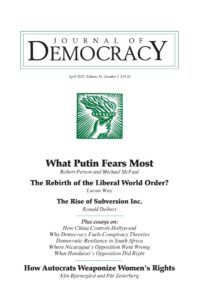 In so doing, she followed a Macronist strategy to de-ideologize political discourse, embrace contradictions, and present a plausible third way, she writes for the Journal of Democracy. Trying to rise above the left-right divide, moreover, fits perfectly into the strategy of “de-demonization” that Le Pen has been pursuing for years.

Macron has a 54% disapproval rate, but holds a 10% lead over Le Pen, according to POLITICO’s latest poll of polls.

In a bruising debate ahead of the vote, Macron accused his far-right challenger of being in the pocket of Russia, The New York Times reports.

“When you speak to Russia, you speak to your banker,” Mr. Macron said, suggesting that Ms. Le Pen would be incapable of defending French interests because “you depend on Russian power” and on the Russian president, Vladimir V. Putin.

Mr. Macron was alluding to a 9.4 million-euro loan, then worth $12.2 million, made to Ms. Le Pen’s National Rally party, formerly the National Front, from a Russian bank in 2014, The Times adds. The loan is still not repaid and, after the collapse of the bank in 2016, is now held by a company with ties to the Russian military.

During her 2017 presidential campaign, Le Pen’s party came under scrutiny for the loan – assistance that amounted to Russian state-sanctioned interference in France’s political system, notes David Levine, an Elections Integrity Fellow with the Alliance for Securing Democracy:

Earlier this year, Le Pen disclosed that notwithstanding the fallout from that loan, she had received a €10.7 million ($11.8 million) loan for her campaign from Hungary’s MKB Bank, whose major shareholders include businessmen close to Prime Minister Viktor Orbán. Autocrats like Orbán and Russian President Vladimir Putin have continuously demonstrated a desire to weaken and undermine democracy. Accepting funds from entities with connections to these leaders creates incentives for other bad actors, foreign and domestic, to try to interfere in French elections.

In the first round this month, Macron achieved only a narrow victory (27.85%) over the right-wing populist Le Pen (23.15%). His success was based not so much on the fervor of the young as on the caution – and alarm – of older voters, says Michael Bröning, Director of the Friedrich-Ebert-Stiftung’s New York office.

Post-election studies show that Macron carried only one age group comfortably: voters aged 65 and older. Among voters between the ages of 25 and 34, the far right’s support increased to more than 35%. A similar trend appears to be unfolding across southern Europe, with young voters in Italy and Spain also tilting dramatically to the right, he writes for Project Syndicate.

Carried too far, populism is obviously dangerous. It mixes easily with xenophobia, anti-capitalism, and illiberal programs of right and left, argues analyst Clive Crook. But to defeat these more poisonous variants, the center needs its own measure of populism. Centrists ought to realize that populism doesn’t have to be illiberal. Indeed, liberalism entirely purged of populism isn’t really liberalism.

“However we decide to interpret political developments in European democracies, their institutions show signs of fraying,” argues Catherine Fieschi, founder of the research and advisory group Counterpoint and author of Populocracy: The Tyranny of Authenticity and the Rise of Populism.

“Be it the voting systems, the electoral calendars, the political parties and even the broad political and cultural references that account for their emergence (social democracy or Gaullism, for instance),” she tells POLITICO. “It is telling that the first-round results in France prompted politicians across the board to immediately question the timing of electoral cycles, the length of the presidential term and the nature of institutional representation.”

A widespread sense of malaise “is not good for turnout and it’s not good for democracy”, said Tristan Haute, a political analyst at the University of Lille, whose research focuses on voter habits. “We’re likely to see a repeat of what happened in 2017, when turnout decreased in the second round and voters cast a record number of blank or spoiled ballots in protest at the choice of candidates,” he added.

Many young voters will probably abstain on April 24, though this should not be interpreted as a lack of interest in politics, he cautioned.

“Young voters are no less politicized and no more individualistic than in the past, and yet they are increasingly tempted by abstentionism,” said Haute. “This discrepancy is explained by a yearning for different forms of political participation that are not limited to elections and the formal institutions of representative democracy.”

One of the defining features of the Yellow Vest insurgents was their attempt to reclaim politics by wresting it from the control of parties and institutions they saw as undemocratic, Magali Della Sudda, a researcher at Sciences-Po Bordeaux, explained in a recent interview with FRANCE 24. “One can credit the movement with getting the French to show interest in their institutions and constitution – a remarkable feat in its own right,” she said.

“With such a small margin, a margin of error of 2 percent and the usual dynamics of an election campaign, the game is still open,” says Jerôme Fourquet of the polling institute IFOP, France’s best known demographer. He says that although Le Pen is not the favorite in the race, it would be wrong to rule out her possible victory now, “especially given that we are seeing increasing anti-Macron sentiment,” he told Der Spiegel.

“This story is a familiar one in advanced democracies where progressive or social democratic parties have struggled to reconcile representing the economically vulnerable while supporting inclusive visions of societies that lower income voters feel disproportionately benefit an (urban, cultural) elite,” she adds. “We saw this play out in the Brexit vote, but also in the Trump vote.”

Observers will be monitoring the election to glean any lessons on how to stave off the challenge of the far-right in the democratic west, analysts suggest.

“When you add up all those who voted for Mélenchon, Zemmour and Le Pen, you get more than half of the voters who chose the extreme,” said Arié Bensemhoun, executive director of the European Leadership Network branch in France. “This is very dangerous for the French society, for democracy.”

“I am appalled by the credulity of those who adhere to ‘Everything but Macron,’ or those who advocate ‘Ni Macron, Ni Le Pen,’ at the risk of letting the heiress of infamous [Jean-Marie] Le Pen win,” he told The Jerusalem Post. “In doing so, they allow the extreme Right, the most radical, the most anti-European, the most xenophobic, racist and antisemitic [political bloc], to reach the position of supreme power in France.”

French voters should not be fooled by Le Pen’s rebranding. The domestic consequences of a Le Pen presidency for marginalized groups as well as her vision for France and Europe should be alarming, Bloch writes for the Journal of Democracy. Although many younger French voters, especially on the left, may be understandably disillusioned with Macron, treating the vote as a choice between two evils is a false equivalency. Abstaining would be “to remain indifferent to an outpouring of hate.”

To quote the French philosopher and political scientist Raymond Aron, “the choice in politics is not between good and evil, but between the preferable and the detestable.”

Abstaining would be “to remain indifferent to an outpouring of hate,” @BlochAgneska writes for @JoDemocracy. To quote Raymond Aron, “the choice in politics is not between good and evil, but between the preferable and the detestable.” https://t.co/UZUXElXh70