The authorities are also using money laundering legislation, the Foreign Agents law and other restrictive laws to crack down on civil society, in an effort to dismantle civic participation spaces that are not controlled by the government, CIVICUS adds.

The regime has shut down 101 civic organizations and charities, including the local branch of the Missionaries of Charity established by Mother Teresa, Reuters reports, and political prisoners are being kept in “horrific conditions.”

Ortega and his wife Rosario Murillo’s corrupt and paranoid dictatorship remains in power despite an estimated 40 to 80 percent abstention rate, depending on who’s counting. But the so-called elections are an unimportant chapter in this dispiriting telenovela. What matters is what happens next, analyst Alma Guillermoprieto writes for The New York Review of Books:

Can renewed or stiffer international sanctions accomplish anything more than increasing the privations of the impoverished citizenry? Has the terrible Ortega-Murillo assassination spree against students and campesino leaders in 2018 permanently terrified the population into
despair or indifference? Will the plump and satisfied business sector—so recently the regime’s greatest ally—rebel now that police have jailed two of its most important representatives?

Earlier this year, Hugo Torres, a 73-year-old former guerrilla companion of now-President Daniel Ortega, died in detention Saturday after concerns were repeatedly expressed for his well-being, AFP reports. Torres, who had risked his own life to break Ortega out of jail in the 1970s during the struggle against the Somoza dictatorship, later became a critic of the president and entered opposition politics.

Human rights lawyer Jared Genser believes that “Ortega is violating not only international law, but also Nicaragua’s own constitution and laws by detaining people and holding them incommunicado for long periods of time,” and will take the detainees’ case to the United Nations Working Group on Arbitrary Detention, The Havana Times adds.

A former Reagan-Fascell fellow at the National Endowment for Democracy (NED), Genser compares Ortega to “a rabid dog, cornered, trapped, and trying to bite anyone who passes by him,” which can be very dangerous, but argues that the way to persuade a dictator to change course is to appeal to those fears.

More than a year has passed since the regime began its relentless crackdown on the country’s democratic opposition [including partners of the National Endowment for Democracy – NED]. Since then, more than 50 individuals – including presidential candidates, opposition leaders, journalists, students, labor leaders, and human rights defenders – have been held as political prisoners in El Chipote, a prison in Managua that has been characterized as “a dungeon,” notes Perseus Strategies:

On June 21, 2022, Félix Maradiaga began a hunger strike to demand an end to the incommunicado detention under which he and the other political prisoners are held.  Precisely due to that incommunicado detention, it was learned only recently that Félix had begun a hunger strike.  Given the horrific conditions he has endured for more than a year, which resulted in the death of political prisoner Hugo Torres in February, we remain extremely alarmed about the fragile health of Félix and all the political prisoners detained in Nicaragua. 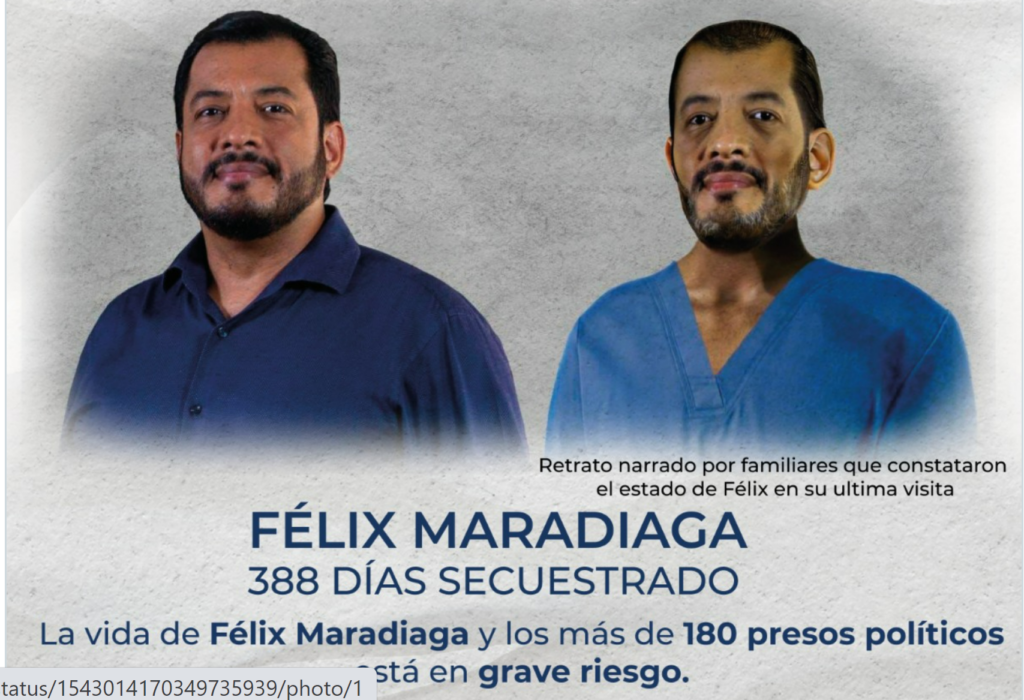 On July 1, 2022, Maradiaga’s wife, Berta Valle, released an artist’s rendering of Félix’s current appearance (above), based on verbal descriptions by the only two relatives that have seen him since his arrest.  She appeared in a press conference alongside Erika Guevara Rosas of Amnesty International and Vilma Núñez of the Nicaraguan Center for Human Rights (CENIDH) to denounce the grave deterioration in Félix’s health over the last year, and to demand immediate access to him and all other political prisoners in the country.

In an unprecedented response, the Ortega regime released a 7-minute video of Félix (above), where he is escorted by heavily armed police into a kangaroo court.  In the video, a magistrate reads aloud the March 3, 2022, sentence that condemned him to 13 years in prison.  Afterward, a Sandinista “journalist” from a state-run news channel asks Félix, “Why do you continue lying to the Nicaraguan people about your condition?”  The line of questioning is blatantly intended to dismiss any concerns about Félix’s health.  However, the deterioration Félix’s condition is both clear and alarming, and only increases concern for the wellbeing of the other 190+ political prisoners held in Daniel Ortega’s prisons.

A link to the Zoom call will be provided on Thursday by 9:30 am ET, 7:30 am Managua to all those who have RSVP’d.  Please email Michael Russo at mrusso@perseus-strategies.com if you wish to RSVP.   Only those who received the invitation, RSVPed by name, and who join the waiting room with their name as registered or with a phone number from which they said they would be calling from will be admitted to the Zoom call.  Simultaneous English-Spanish translation will be available.

(2/2) We demand Félix: (1) be able to speak to free media, NOT the regime’s propagandists which edited the video to show what they wanted; & (2) let him be examined by an independent doctor of our choosing. If the regime says no then no one can believe their claims he is fine.