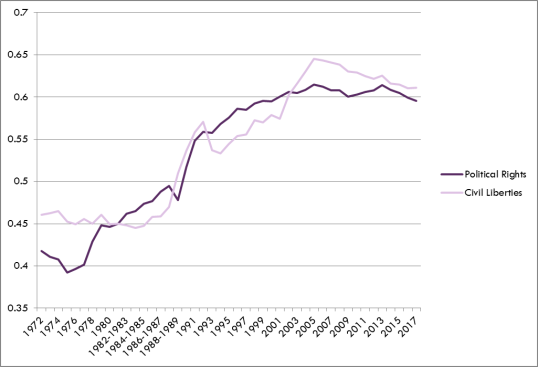 Freedom in the World’s Political Rights and Civil Liberties Ratings Since 1972. Global Averages, 1972-2017

There’s a rising angst in foreign policy circles over the status of democracy around the world, CNBC reports.

“This is an authoritarian era, all things being equal. Democracy is in something of a recession,” Council on Foreign Relations president Richard Haass told CNBC’s Hadley Gamble in Paris on Friday.

“For 70, 75 years, we’ve had this rules-based international system, no great power wars, muted rivalries … and now when I look at the world and the people running the world, it gives me pause. I’m worried that when historians look back on this moment, they’re going to see this is the beginning of the unraveling.”

The current U.S. administration may reject the ‘ideology of globalism’, but an ‘America First’ foreign policy need not entail isolationism, observers suggest. 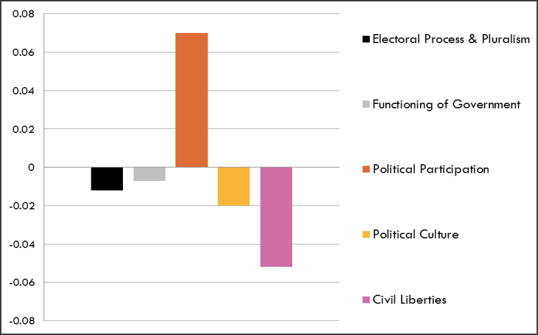 At its core, ‘America First’ is the consequence of a strategic rivalry between two great powers decoupled from any global ideological struggle, says analyst Crispin Revere. Americans rightly believe that democracy and individual liberty are superior to Confucian dictatorship for human well-being. What ‘America First’ discounts, however, is the belief that Western liberalism is necessarily more successful with regard to governance, economic growth or social harmony, he writes for The Strategist:

The China–US cold war contrasts with the struggle against the Soviet Union, where American defeat meant the collapse of global capitalism and classical liberalism. It resulted in an alliance framework organised by geography yet fused by ideology. This time around, however, American defeat means, well, American defeat. This fact, more than any other, guarantees that ‘America First’ will continue to attract adherents domestically and dominate American foreign policy thinking long after Trump himself leaves office.

America retains the advantage [as] the world’s greatest democracy and promoter of democracy, argues Conrad Black.  China has no institutions of any public trust except, up to a point, the armed forces.

The president is reasserting his own claim to prioritize the U.S. national interest over all other considerations, rejecting what he sees as the “internationalist” view of free trade or democracy promotion abroad. The Washington Post’s Josh Rogin writes:

Sometimes Trump has claimed his foreign policy is modeled after President Ronald Reagan, based on their shared love of defense spending. But Reagan also believed in arms-control negotiations, trade liberalization, immigration reform, human rights and democracy promotion, all of which Trump has largely tossed aside.

Rationales for U.S. democracy promotion are varied [and] U.S. leaders have long drawn links between the state of global democracy and U.S. national security and economic interests, according to a recent report from the Congressional Research Service. Members of Congress and others have sometimes asserted that the United States has a moral obligation to promote democracy and human rights, and some scholars argue that an inclination within U.S. foreign policy for “values promotion” derives from fundamental aspects of American political culture.146

Nonetheless, analysts continue to debate the extent to which the United States should promote democracy and what the proper balance of emphasis is between this objective and other foreign policy priorities, adds CRS foreign affairs analyst Michael A. Weber, author of Global Trends in Democracy: Background, U.S. Policy, and Issues for Congress:

Some have questioned the appropriateness of democracy promotion at a basic level, such as by asserting that it constitutes an imposition of American values on other societies. There are also debates over whether these efforts constitute violations of sovereignty or improper interference in the politics of other countries.147 Supporters of democracy promotion have defended these activities as legitimate and generally argue that aspirations for, and values reflecting, democratic freedoms are universal.148 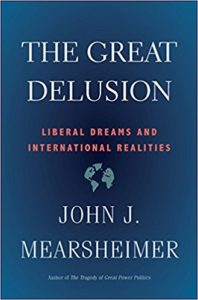 Authoritarian leaders have reason to fear democracy assistance groups like the National Endowment for Democracy, according to ‘realist’ analyst John Mearsheimer.

In any case, “Americans are less interested in exporting democracy,” according to Eurasia Group analyst Ian Bremmer. The world is entering a “geopolitical recession” that heralds the end of the U.S.-led global order, he told CNBC.