China’s relentless rise and its more recent embrace of repressive tactics that recall the Mao era — a process accelerated by President Xi Jinping’s bid to stay in power indefinitely — have fractured a deeply rooted consensus in Washington about the long-term direction of its relationship with Beijing, The New York Times reports:

Gone is a widespread agreement among diplomats, scholars and businesspeople that China is gradually converging with the United States and, therefore, that Americans should work to manage any flare-ups between the two countries. With China now unabashedly charting its own course — one that diverges rather than converges with the liberal democracies and market economies of the West — conflict, many say, is inevitable.

“Even those who are the most optimistic, hopeful and in some ways romantic about the U.S.-China relationship have been forced to confront a new China,” said Kurt M. Campbell, who, as an assistant secretary of state for East Asian affairs, was an architect of the Obama administration’s policy of pivoting toward the East.

If Xi succeeds, he will not only have secured his own future and extended the future of China’s Communist Party, he may also establish a new model for authoritarianism to thrive worldwide, notes analyst Max Fisher:

It helps to mentally divide dictatorships into two categories: institutional and personalist. The first operates through committees, bureaucracies and something like consensus. The second runs through a single charismatic leader. China, once an almost Socratic ideal of the first model, is increasingly a hybrid of both. Mr. Xi has made himself “the dominant actor in financial regulation and environmental policy” as well as economic policy, according to a paper by Barry Naughton, a China scholar at the University of California, San Diego.

“It’s dangerous when there aren’t any rules left that give other people a shot at power or that tell you when to end your own time in power,” says Columbia University’s Andrew Nathan, a National Endowment for Democracy board member. “It potentially destabilizes the system, not only for the succession after Xi Jinping, but down the road even after that.”

The ruling Communist Party believes it has found the best model of government for China – and is not afraid to shout about it as it looks at a West many in China believe is stagnating and is increasingly hostile towards Beijing and its political system, Reuters adds.

“Democracy, which has been explored and practiced by Western societies for hundreds of years, is ulcerating,” said an editorial in the official Global Times, which often expresses nationalist views. “Our country must not be disturbed by the outside world or lose our confidence as the West grows increasingly vigilant toward China.”

Abroad, Xi’s building out Chinese influence. At home, he is rooting out corruption and committed to remolding the Communist Party in his own image, observers suggest.

“Xi Jinping offered a rescue plan for the party,” says Peking University’s Zhang. He’s now using the party as his tool of choice to transform China and reshape the institutions of the liberal world order. “The party is playing a bigger role in the country in a more straightforward and naked fashion,” he says

“Xi has all this power. But we don’t really know what he wants to use it for,” said Kerry Brown, the director of the Lau China Institute at King’s College London. 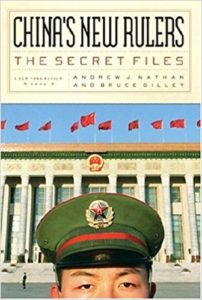 In 2005, Bruce Gilley, a political scientist, wrestled with one of the most important questions for any government — is it viewed by its citizens as legitimate? — into a numerical score, determined by sophisticated measurements of how those citizens behave, Fisher adds:

China, his study found, enjoyed higher legitimacy than many democracies and every other non-democracy besides Azerbaijan. He credited economic growth, nationalist sentiment and collective leadership. But when Mr. Gilley revisited his metrics in 2012, he found that China’s score had plummeted…..

So China is instead promoting “ideology and collective social values” that equate the government with Chinese culture, according to research by the China scholar Heike Holbig and Mr. Gilley. Patriotic songs and school textbooks have proliferated. So have mentions of “Xi Jinping Thought,” now an official ideology.

Mr. Xi’s power grab has thrown this new China into stark relief, “exacerbating the fault line that already exists between China and the liberal democracies of the world,” said Orville H. Schell, the director of the Center on U.S.-China Relations at the Asia Society:

The disillusionment with China, he said, began setting in long before Mr. Xi cemented his grip on the Politburo. Be it saber-rattling in the South China Sea, proselytizing on American college campuses, theft of corporate secrets or censorship of the web, China has alienated one constituency after another in the United States.

“The military is gone, the press is gone, the intellectuals are gone, civil society is gone and now the businessmen are gone,” said Mr. Schell. “If you’re taking the long view, you’d have to say we’re on diverging pathways,” he tells The Times.

China has proven willing to deploy such “sharp power”, one observer notes, although “soft power”, cultural attraction, so far has largely eluded it because the party insists on retaining control, which limits the appeal beyond its own borders, and even within them.

China’s influence on bastions of higher education has also come under scrutiny, The Times adds:

The director of the F.B.I., Christopher A. Wray, testified recently that he believed universities were underestimating the ability of Chinese students to collect valuable national security intelligence. He expressed concern about the Confucius Institutes, a global learning network sponsored by the Chinese government, whose expansion has elicited criticism over whether it is a tool to influence public opinion about China.

“I don’t think there’s something inherent in dictatorships and one-man rule that causes clashes with U.S. interests, other than, of course, the conflict in values,” said Jeffrey A. Bader, a former China adviser to President Barack Obama.

In a rare public expression of dissent in China, a well-known political commentator and a prominent businesswoman have penned open letters urging lawmakers to reject a plan that would allow President Xi Jinping to rule indefinitely, AP adds:

In a statement Monday on WeChat to Beijing’s members of China’s rubber-stamp parliament, Li Datong, a former editor for the state-run China Youth Daily, wrote that lifting term limits would “sow the seeds of chaos.” “If there are no term limits on a country’s highest leader, then we are returning to an imperial regime,” Li told The Associated Press on Tuesday. “My generation has lived through Mao. That era is over. How can we possibly go back to it?”

Wang Ying, a businesswoman who has advocated government reforms, wrote on WeChat that the Communist Party’s proposal was “an outright betrayal” and “against the tides.”

Sensitive Words highlights keywords that are blocked from Sina Weibo search results. China Digital Times independently tests the keywords before posting them, but some searches later become accessible again. You can also browse the archive of sensitive words. CDT is supported by the National Endowment for Democracy.

China is experimenting with a form of authoritarianism that, if successful, could close the seemingly unbridgeable gap between what citizens demand and what it can deliver, the NYT’s Fisher adds:

For example, a program called “Mayor’s Mailboxes” allows citizens to voice demands or complaints, and rewards officials who comply. The program, one study found, significantly improved the quality of governing and citizens’ happiness with the state. No one would call these towns democratic. But it felt enough like democracy to satisfy some.

This sort of innovation began with local communities that expressed their will through limited but persistent dissent and protest. Lily L. Tsai, a Massachusetts Institute of Technology scholar, termed it “accountability without democracy.” 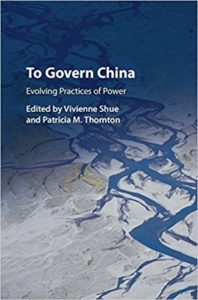 Now, some officials are adapting this once-resisted trend into deliberate practice. Their goal is not to bring about liberalization but to resist it — to “siphon off popular discontent without destabilizing the system as a whole,” the China scholars Vivienne Shue and Patricia M. Thornton write in a new book on governing in China.

Xi’s move also confirms that the terrain is shifting within China and abroad, analysts attest.

“Businesspeople shouldn’t assume they’re dealing with their Chinese counterparts from 10 or 15 years ago” who were interested in profits and growth, says Zhang Jian, an associate political science professor at Peking University. “They are very different animals now …  they have a lot of new political calculations.”

Together, China and Russia “are undermining the international order” of free trade, unfettered capital, and digital data flows “from within the system by exploiting its benefits while simultaneously undercutting its principles,” according to a U.S. strategic review.

Xi is undermining the institutionalism that made China’s authoritarianism unusually resilient. Collective leadership and orderly succession, both put in place after Mao Zedong’s disastrous tenure, have allowed for relatively effective and stable governing, Fisher adds:

Ken Opalo, a Georgetown University political scientist, wrote after China’s announcement that orderly transitions were “perhaps the most important indicator of political development.” Lifelong presidencies, he said, “freeze specific groups of elites out of power. And remove incentives for those in power to be accountable and innovate.”