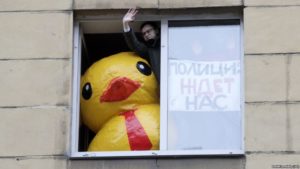 A yellow duck that landed a Russian opposition activist in jail this week has now taken center stage in a social media campaign to secure his release. A St. Petersburg court reportedly sentenced Artyom Goncharenko to 25 days behind bars on Monday after he displayed a giant inflated duck outside an apartment window during an anti-election rally last month, The Moscow Times reports:

The “Utka 2018” social media account, which promotes itself as a tongue-in-cheek candidate in the Russian presidential elections this month, has called on its readers to join a campaign to free Goncharenko…..The yellow duck has come to symbolize corruption in Russia after opposition leader Alexei Navalny’s high-profile investigation into Prime Minister Dmitry Medvedev’s alleged summer home said that it contained an exclusive home for ducks.

Goncharenko was sentenced after being detained on his way to attend a February 25 rally in memory of slain opposition leader Boris Nemtsov, RFE/RL adds.

Russian activists Nikita Kulachenkov and Mikhail Maglov will talk at the Wilson Center’s Kennan Institute about their work exposing corruption in Russia from abroad and the impact that these investigations have on the Kremlin’s legitimacy. They will also discuss how illicit financial flows from Russia, including real state and luxury goods, reach the West and what can be done to stop them.

This event co-organized with Freedom House.