A quiet revolution is sweeping Eastern Europe. From the Czech Republic to Albania and from Slovakia to Romania, people are taking to the streets to demand greater transparency from their governments, according to a new STRATFOR analysis:

When populism undermines democracy, mobilizing civil society may be the last firewall in its defense, observers suggest.

Czech Prime Minister Andrej Babis’s approach is one of “technocratic populism,” an anti-elite ideology that merges the appeal of technocratic expertise with populism, rejecting traditional parties and arguing that experts should be in charge to solve problems apolitically, according to analysts Michael Bernhard, Petra Guasti and Lenka Bustikova.

Babis undermined horizontal accountability by replacing the justice minister to prevent charges against himself and his family from reaching court. He undermines vertical accountability, keeping voters’ support by sponsoring targeted measures such as free public transport for seniors and students and exploiting divisions within the parliamentary opposition. But an active civil society can also defend the rule of law by protest. The Czech civic resistance campaign – “One Million Moments for Democracy” – is an effort to use a third method: social accountability, they write for The Post’s Monkey Cage blog: 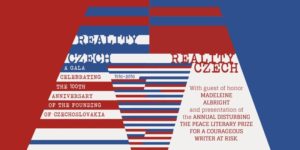 Does this method work? Based on the collective knowledge of more than 3,000 country experts, the “Varieties of Democracy (V-Dem)” project has been able to collect a whole range of new democracy indicators, including civil society activism, and undertake research on this question and many others. … Using the new V-Dem data on civil society, …[researchers] have shown that when civil society gets involved, it can indeed help prevent democratic breakdowns. Active and engaged civil societies have made democracies more durable, both in the past century and this one. An active civil society can also influence foreign policy and prevent wars.

“Quite literally, Czech activists know they stand on the border between democratic hope and illiberal danger,” they conclude. RTWT

Poland’s civil society also fulfills a crucial role when it comes to civic resilience, analyst Carolin Heilig writes for The Globe Post. While the country’s political landscape for over a decade has polarized around PiS and their liberal-conservative opponent the Civic Platform (PO), civil society represents a much completer spectrum of political and cultural positions. The influence of civil society on political processes becomes therefore crucial as its scope determines whether positions beyond the (center-) right are reflected in national policy-making. RTWT

See how award-winning photographer Chris Niedenthal (below) documented Poland’s influence on the fall of Communism.