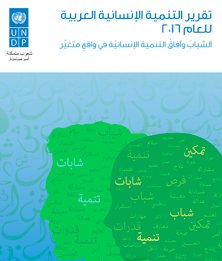 The Arab world’s new generation – 60 percent of the population is under 30 years old – is “the largest, the most well educated and the most highly urbanized in the history of the Arab region,” according to the latest UN Arab Human Development Report. “Thanks to social media, they are more in tune with the world than ever. If only their rulers knew what to do with them.”

The report highlights “the lack of confidence of young people in the democratic process …. [which] limits their participation in elections, compared with other social groups, thus deepening their deprivation, a major challenge to human development in the Arab region.”

“Given the current situation in the Arab region, the success of any programmes or public policies to empower youth must involve strengthening the concept of inclusive citizenship for all,” it adds. “Such an objective is difficult to attain even in mature democracies.”

The vast majority of youth in the Arab countries still adhere to conservative traditions, the report notes:

According to recent opinion survey data, more than three quarters of youth in the region believe tradition is important in their lives. The findings of values surveys likewise indicate considerable support for political Islam, though this tends to rise with age and fall with education. Younger and more well educated individuals show a greater preference for democratic forms of governance…..Civic engagement is highest in more democratic countries and countries with greater media penetration such as Algeria, Iraq, Lebanon, Libya, Palestine and Yemen and lowest in Egypt, Jordan, Morocco and Qatar.

Although home to only 5% of the world’s population, in 2014 the Arab world accounted for 45% of the world’s terrorism, 68% of its battle-related deaths, 47% of its internally displaced and 58% of its refugees. Yet Arab regimes tend to respond to security threats by further tightening their grip, The Economist notes:

Governments divert development capital to foreign arms purchases. For want of social and physical mobility at home, young Arabs traditionally travelled abroad. But such safety valves are closing fast. Despite the Arab League’s pretensions to brotherhood, visa-free travel among its 22 countries is unusual. Many Arabs need exit permits to boot. Where states are embroiled in conflict, many live in restricted zones inside their own countries. But physical and bureaucratic barriers touted as security measures can be counter-productive.

“The moment I ban a displaced or marginalised person from travelling to work, I’m implicitly leaving him as a victim for an extremist ideology,” says Jad Chaaban, the report’s lead author. Many scholars and analysts believe the region’s wars are motivated primarily by power plays and control over territory, notes Geneive Abdo, author of The New Sectarianism and a senior fellow at the Atlantic Council’s Rafik Hariri Center for the Middle East. However, if you read the hostile and aggressive twitter feeds in Arabic and the Arabic press it is obvious religion has something to do with it, she writes:

Both Shi’a and Sunnis believe the other is trying to extinguish their sect—and this is one of the many reasons the violence has increased. The governments in the region—particularly Shi’a Iran, and Sunni Saudi Arabia, Turkey, Bahrain and the United Arab Emirates—fuel this perception because it serves their geo-political interests. All of these governments want the sect they lead to have more power in the Middle East. In some cases, the government propaganda campaigns were very effective in driving a wedge between Shi’a and Sunnis in their countries. –

Markus Loewe, research team leader on the Middle East and North Africa at the German Development Institute expects “another wave of protests and rebellion in several Arab countries over the next couple of years.

“One reason is the high youth unemployment. But another one is the lack of political reforms,” he told DW. “With the exception of Tunisia, the Arab countries are not really on a path toward democracy – the people lack a political voice. The governments fail to deliver social and economic reforms. Many countries are based on old sources of income and people are frustrated – there’s no progress anywhere.”