Archigos. A Data Base on Leaders

Deference to autocratic rulers is not only a bad idea for democracy: It’s terrible for the economy, too, according to a new analysis.

The authors of the study published in Leadership Quarterly analyzed the governments of 133 countries between 1858 to 2010, and found that autocrats were either damaging or inconsequential for the economy of their countries. Besides showing the poor economic outcomes of oppressive regimes, the study calls into question the idea of “benevolent dictators”—for instance Singapore’s Lee Kuan Yew or Rwanda’s Paul Kagame—who are commonly believed to be good for the economy, notes Quartz’s Annalisa Merelli: 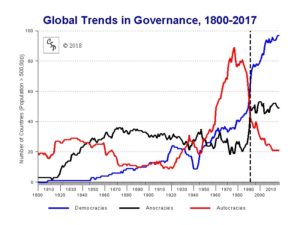 The researchers – from the Royal Melbourne Institute of Technology and Victoria University in Melbourne – used data from the Archigos dataset of leaders, which lists both the leaders of countries and the person with the most power in a country at any given time. ….The data was then cross-referenced with the Polity IV dataset, which establishes the kind of political government in place for 185 countries every year, defining whether the country is a democracy or an autocracy. For each year, countries are scored from 1 to 10. Scores below 6 indicate an autocratic regime, while democracies stand above six.

The study suggests that there’s a strong economic case for a foreign policy that prioritizes advancing democracy.

American foreign policy is overdue for a rebalancing, one that would curb military deployments in more than 100 countries and instead revive a more multidimensional approach to strengthen democracy and make the world safer, The New York Times adds:

James Goldgeier, a professor of international relations at American University, said that a recent roundup of progressive and conservative views on reimagining foreign policy, in the Texas National Security Review, showed potential for a bipartisan consensus. It would be based, he said, on “the growing belief among many progressives and conservatives that the United States should be engaged in fewer military interventions in the world, given the failures in Iraq, Afghanistan and Libya.”

But bipartisan consensus is threatened by the Office of Management and Budget’s proposal to  stop the State Department and U.S. Agency for International Development from continuing ongoing programs, CNN reports,

This makes America less safe. It’s also mathematically absurd as the foreign aid budget is minimal as a percentage of total government spending. More than that, this spending has already been authorized by Congress. And as I’ve noted, U.S.A.I.D. is far more transparent than most agencies in outlining where, how, and to what effect it spends taxpayer money, writes The Washington Examiner’s Tom Rogan:

It isn’t just U.S.A.I.D., the State Department, and the International Republican Institute which matter here. There is a litany of other organizations such as the National Endowment for Democracy that deliver great bang for the buck. But the fact that the administration is obstructing American interests in the Indo-Pacific is especially absurd. Do we want to sustain the U.S.-led international democratic order in the 21st century? Or do we want China’s feudalism to dominate the globe?

“Many of these cuts would have direct impact on the administration’s foreign policy priorities: work that supports the democratic processes in Tunisia and Burma, funding for the democratic opposition in Venezuela and Nicaragua … cancels $280 million in unobligated funds to support the Indo-Pacific Strategy, expand trade and energy programming, and counter China’s malign influence,” said Diane Zeleny of the International Republican Institute, which promotes global democracy and good government.