To protect its sovereignty and independence, Mongolia has walked a geopolitical tightrope tethered by a “good neighbor” policy with Russia and China and a “third neighbor” policy with the United States and other countries, according to STRATFOR analysts Jeff Goodson and Jonathan Addleton. The great power competition among China, Russia and the United States is changing the calculus on Mongolian sovereignty; the most visible feature of that competition is China’s emergent regional and global hegemony, they write:

The significance of democracy in U.S. foreign policy has arguably declined. But the U.S. national defense and security strategies — both constructed around great power competition — are opening doors for bilateral and regional cooperation that can strengthen Mongolia’s geopolitical hand. These include the U.S. emphasis on Russia and China, the U.S. pivot to the Indo-Pacific and U.S. outreach to North Korea — where Mongolia is positioned well to facilitate peace negotiations. 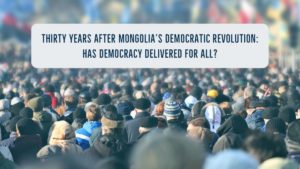 Thirty years after the fall of communism and the transition to democracy in Mongolia, fears of potential democratic backsliding in the country have begun to surface, especially in a region where authoritarian influence looms large, the National Endowment for Democracy (NED) adds. The Mongolian government has failed to address critical issues such as increasing socioeconomic inequality and corruption, while the country’s political processes lack the ability to engage with youth, low-income communities, and other disadvantaged groups. This has fueled growing frustration, populist sentiments, and widespread disillusionment with Mongolia’s democracy. In response to the discontent with democratic governance, a new wave of leadership and activism that is determined to consolidate democracy and combat rising populism has emerged.

In late December, a revised election law governing the June 2020 parliamentary election was passed, notes Julian Dierkes, Associate Professor at the University of British Columbia’s School of Public Policy and Global Affairs, and a principal author of the Mongolia Focus blog. The election will follow the 1992 and 2008 examples in using plurality-at-large voting. As in previous elections, the main question will be whether voters’ frustration can find a constructive outlet in new parties or candidates, or whether legislation will have succeeded in advantaging the Mongolian People’s Party and what remains of the Democratic Party. This question will be important in judging the future fate of Mongolian democracy, he writes for the East Asia Forum.

In a forthcoming presentation, Mongolian sociologist Dolgion Aldar will draw on her knowledge as an independent researcher of good governance and social issues to illustrate what is at stake thirty years after Mongolia’s democratic revolution in 1990. Drawing upon current discussions on the nexus between democracy and socioeconomic inequality, Ms. Aldar will examine whether Mongolia can address the present challenges and reaffirm its commitment to democracy. Through a sociological lens, she will propose ways in which the next generation of leaders may address inequality through democratic processes in the lead-up to critical parliamentary elections later this year. Lynn Lee, Associate Director for Asia at NED, will follow with comments.