Georgians expressed confidence in the local electoral process, with a vast majority describing the process as “safe” (93 percent), “well-ordered” (93 percent), and “without intimidation” (92 percent), albeit with some reservations about its conduct – 30 percent are not confident in the counting process. At the national level, Georgians remain skeptical that their representatives are actively working on the issues that matter to citizens. The overwhelming majority expect MPs to serve their party’s interests (75 percent) and MPs’ own interests (55 percent), over those of citizens (41 percent), with results even less favorable in Tbilisi. 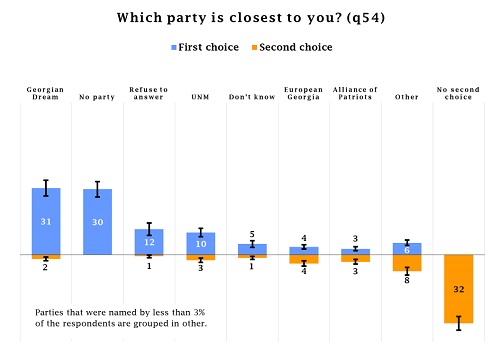 Moving forward, it will be critical for the parliament and new local councils (sakrebulos) to increase engagement with citizens, particularly youth, and deliver on priority issues, the survey adds.

Although Georgia’s voters evaluated the conduct of local elections in October mostly favorably, citizens are increasingly unhappy with the direction of their country and highlight a number of economic and environmental issues as their top priorities, according to poll results released by NDI [a core institute of the National Endowment for Democracy] and CRRC-Georgia:

A plurality, 39 percent, of Georgians believes that the country is going in the wrong direction, surpassing those who think the country is going in the right direction (26 percent) or staying the same (32 percent) for the first time in a year. Employment remains the number one national issue, while roads and pollution of environment continue to be a priority at the local level. Environmental concerns rank high in Tbilisi where it is the number one local issue.

“At a time when the government is eliminating the environmental ministry as a stand-alone institution, Georgian citizens are demanding that resources and policies for environmental improvement not be neglected,” said Laura Thornton, NDI senior country director.

The polls show that 72 percent approve Georgia’s membership in the EU, while 64 percent believe Georgia’s NATO membership should be the state priority. The pro-Western sentiment could be interpreted as a setback for the Kremlin, which has targeted the country in its disinformation operations. A recent Senate staff report, titled “Putin’s Asymmetric Assault on Democracy in Russia and Europe: Implications for U.S. National Security,” includes numerous references to Georgia, with its executive summary stating that Moscow aggressively targeted Georgia and Ukraine after they moved closer to the European Union and NATO, attacking them “with cyber warfare, disinformation campaigns, and military force.”

A new generation of Georgian political leaders is pragmatic when dealing with Russia, The Economist adds:

This is very different from Georgia’s approach under the former president, Mikheil Saakashvili. He relished provoking Vladimir Putin, reportedly calling him “Lilli-Putin”, and was unabashed about his admiration for America, which in turn regarded him as a democratic beacon in a region of autocrats. But tensions with Russia increased, culminating in a five-day war which Georgia lost. In his final years in office Mr Saakashvili was seen as increasingly authoritarian, and in parliamentary elections in 2012 his party was beaten by Georgian Dream, a movement led by the country’s richest man, Bidzina Ivanishvili, an idiosyncratic billionaire.

“This government is bending over backwards not to antagonize Russia,” says Ojars Kalnins, a Latvian politician and diplomat.

Other key results of the NDI survey include: