In the heady days of the Arab Spring, it was easy to get swept along by such naive good intentions and by the promise of social media as a benevolent political force, notes Jacob Weisberg. Wael Ghonim, an Egyptian Google employee, used a Facebook page as an organizing tool in the revolution that overthrew Hosni Mubarak in 2011, he writes in The Autocracy App, an essay for The New York Review of Books: 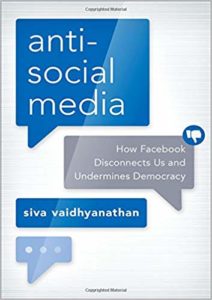 Egypt is only one of the places where the digital levers of the opposition became the cudgels of the regime, once it discovered how useful they were for disseminating propaganda and monitoring dissent. After the Egyptian revolution was hijacked and then reversed, Ghonim reconsidered his enthusiasm for Facebook. “Social media only amplified that state by amplifying the spread of misinformation, rumors, echo chambers, and hate speech,” he said in a 2015 TED talk. “The environment was purely toxic. My online world became a battleground filled with trolls, lies, and hate speech.”

As Facebook proved a better tool for autocrats than for revolutionaries, the protest machine became a surveillance and disinformation machine, Weisberg adds. 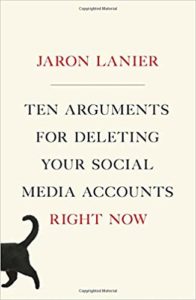 Early enthusiasm for the democratizing potential of “liberation technology” “blinded many to the ways social media—especially Facebook—could be used by authoritarian governments to surveil, harass, and suppress dissidents,” Siva Vaidhyanathan writes in Antisocial Media: How Facebook Disconnects Us and Undermines Democracy. His book is an indictment of how social media “has fostered the deterioration of democratic culture and an ideology that sees computer code as the universal solvent for all human problems.” 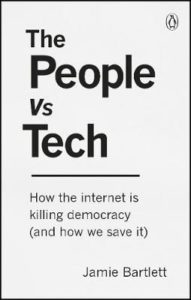 To discuss the growth in tribalism and explain the age of “Tinder politics”, The Guardian’s Jordan Erica Webber speaks to author and tech blogger Jamie Bartlett, whose book The People Vs Tech explores the “bitter conflict” between technology and democracy. They address how the internet has turbo-charged human behavior to expect instant gratification in areas where it does not belong and how, as a result, citizens, as much as governments, need to change the way they interact with data.

It’s a sign of the times that a 1980s’ must-read text on Soviet subversion techniques is once again essential reading writes Jan Surotchak, Senior Director for Transatlantic Strategy at the International Republican Institute, a core affiliate of the National Endowment for Democracy, citing Dezinformatsya: Active Measures in Soviet Strategy by Richard H. Shultz and Roy Godson.

IRI will be leading a side-event at November’s annual Warsaw Security Forum, using input from IRI’s Beacon Project to examine how state institutions and NGOs can best work together on a range of issues from election campaign regulation, to enhanced privacy laws, to more NGO-driven initiatives, including research and analytics, developing new technology, legislation scrutiny and fact-checking, he adds: 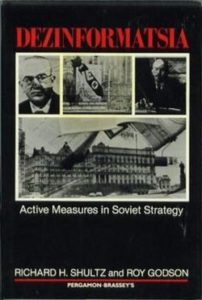 Just as in the 1980s, democratic societies and governments across the Transatlantic space find themselves gearing up to defend democratic institutions against attempts by Moscow to subvert them. And while the opponents of democracy certainly have a broader palette of technologies at their disposal than they did in the Cold War, so to do the Western allies have innovative ways to respond. Central to this effort, as in the days of the original dezinformatsya effort is coordinating a democratic response that strengthens the gaps in our own democracies that Moscow seeks to exploit.

The threat posed by the manipulation of information has sparked growing awareness and concern in both Europe and the U.S. Pulitzer Center Executive Editor Indira Lakshmanan moderates a panel (above) discussing the dangers of disinformation for democracy. Panelists include: John F. Lansing, chief executive officer and director of the U.S. Agency for Global Media (formerly the Broadcasting Board of Governors), Dipayan Ghosh, Pozen fellow at the Shorenstein Center at Harvard Kennedy School, and Jean-Baptiste J. Vilmer, the director of the Institute for Strategic Studies (French Ministry for Armed Forces).