Following a year-long investigation, the Corruption and Human Rights Initiative (CHRI) have published their full findings on Kazakhstan II, produced in collaboration with the Eurasia Democracy Initiative. Kazakhstan II is the name given to $48.8 million in funds belonging to the people of Kazakhstan, confiscated by the Swiss Government in 2011 following a Geneva judicial investigation.

“The money found its way into lavish propaganda campaigns, and organisations headed by Zhas Otan officials, the youth wing of the country’s authoritarian Nur Otan party,” said the report’s co-author Tom Mayne. “We also came across quite disarming evidence of fraud”. 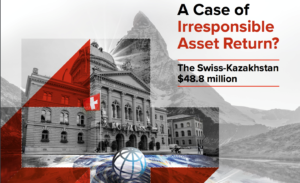 The funds were restituted back to Kazakhstan through a high-risk return strategy, brokered and overseen by the World Bank, but tarnished by conflicts of interest, political patronage, evidence of fraud, and serious breaches of transparency and reporting requirements, says the report, A Case of Irresponsible Asset Return? The Swiss-Kazakhstan $48.8 Million:

Free from the close public and international security returned assets ordinarily garner, the high-risk return strategy saw the funds being steered by a consortium of Gongos headed by the President of Kazakhstan’s daughter, Dariga Nazarbayeva, who is a senior Nur Otan politician in her own right….

CHRI and the report authors are calling on the Swiss Government and World Bank to put a freeze on any further non-essential expenditure, so a thorough independent investigation can be conducted into the application of the restituted funds, and new oversight structures engineered that can protect the assets from any further abuse.

“$48.8 million in frozen assets were funnelled back to Kazakhstan very quietly by the Swiss government through a series of opaque instruments,” said report co-author Professor Kristian Lasslett. “The World Bank and Kazakh Government unfortunately led the public to believe this was Swiss development aid, its shady origins were hidden from victims”. 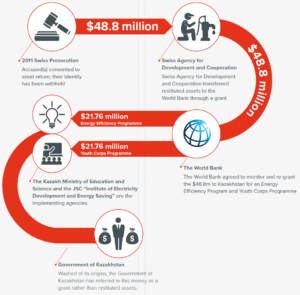 Kazakhstan is a ‘kleptocracy’ ruled by an autocrat, observers suggest.  President Nursultan Nazarbayev has helped define the new authoritarian normal, expert Ben Judah wrote in a report for the Hudson Institute.

With a little courage and imagination, Western policymakers could dry up the illicit funds that keep autocratic leaders in power and drive real, “home-grown” democratic reforms in authoritarian countries around the world. To do so would, in fact, bolster democracy at home as well, argues AEI analyst Clay R. Fuller:

To understand how, start by reading the latest edition of the [National Endowment for Democracy’s] Journal of Democracy on the “Rise of Kleptocracy.” Steal, obscure, and spend …. is the modus operandi of authoritarian kleptocrats. These enemies of democracy launder stolen cash and their reputations using new media and PR experts, and become multinational philanthropists.

Kleptocracies create their own legal mechanisms to target political enemies and challenge the international legal infrastructure, experts told a recent Wilson Center seminar (below) on kleptocracy in Central Asia, how it influences a state’s legal and financial mechanisms, and its impact on U.S. national security.

China’s investments in oil- and gas-rich Central Asia have allowed autocratic regimes in that region to flourish. A prime example is Kazakhstan, argues Will Doig, the author of “High Speed Empire: Chinese Expansion and the Future of Southeast Asia.” The Kazakh government, a veritable kleptocracy, is extremely corrupt. On Transparency International’s 2017 Corruption Perceptions Index, Kazakhstan ranked in the bottom third of 180 countries, he writes for Foreign Policy.

“Victims of corruption in Kazakhstan have unfortunately seen their assets mishandled by the World Bank and Swiss Government,” said Fatima Kanji who heads CHRI’s London office. “They consciously set a low demonstrable standard for responsible asset return confirming the very fears of civil society: the repatriation of assets without public knowledge or consultation, and the repeated misuse of corrupt assets under the World Bank’s watch.”

“As the Swiss fast approach the restitution of over half a billion US Dollars in stolen assets to neighbouring Uzbekistan, now is the time to learn the lessons of Kazakhstan II to ensure these mistakes are not repeated,” she added.