A Grand Strategy of Resilience https://t.co/u22BnZnz7L via @ForeignAffairs

To build a foundation of domestic strength is not to withdraw from the world—far from it. Most countries, including the United States, cannot be completely resilient on their own, says Ganesh Sitaraman, Professor of Law at Vanderbilt Law School and the author of The Great Democracy: How to Fix Our Politics, Unrig the Economy, and Unite America. 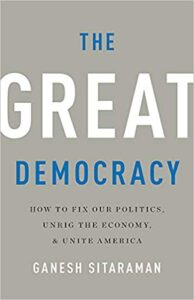 The solution is to deepen the ties and alliances that bind the like-minded liberal democracies of North America, western Europe, and Northeast Asia, he writes for Foreign Affairs:

A single country might not control the entire supply chains needed to respond to a public health emergency, for instance, but an alliance likely could. An alliance composed of resilient liberal democracies would also have the collective countervailing power to deter geoeconomic threats or cyberattacks from great-power competitors such as China and Russia. Critically, the purpose of such collective resilience is not to expand and engulf the world; it is to preserve the states within the alliance. RTWT

Existing structures can be the stepping stone for such an alliance, according to Andrea Venzon and Colombe Cahen-Salvador, co-founders of Now! For example, the G7 – an outdated group of countries that is unrepresentative and lacks a clear purpose – could be transformed into the Democratic 10 (D-10) with the aim of protecting democracy. By adding to the G7 countries (Canada, France, Germany, Italy, Japan, the United Kingdom, and the United States) Australia, India, and South Korea, the group will gain in economic and diplomatic strength, they write for The Independent.

Any grand strategy has trade-offs, and a resilience-based approach is no exception, adds Sitaraman. It would require the United States to abandon democracy promotion by force and deprioritize policies that focus on economic efficiency and benefit global capital.