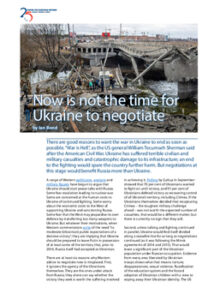 The United States needs to make explicit that it supports Ukrainian victory and Russian defeat in terms of the Kremlin’s strategic goal of destroying the Ukrainian nation and Ukrainian identity, according to a strategy paper from the Atlantic Council. It should commit to helping the Ukrainian people achieve a democratic, independent, sovereign, prosperous Ukraine that has the means to deter and defend itself against any future Russian aggression, say authors Stephen J. Hadley, Ambassador William B. Taylor, John E. Herbst, Matthew Kroenig, Melinda Haring and Jeffrey Cimmino.

There are at least six reasons why Western advice that Ukraine should now negotiate with Russia is misplaced, writes Ian Bond of the Center for European Reform: 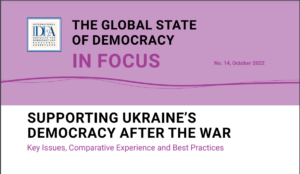 How can the war on Ukraine impact the sustainability of democracy worldwide and what role can funders play in strengthening local civil society long-term?

Join the Community Foundations of Canada, Philanthropic Foundations Canada, Charles Stewart Mott Foundation, and the German Marshall Fund of the United States for a funder-only roundtable series featuring guest speakers with deep expertise on the war and its ramifications.

Moscow’s effort to switch off the lights in an entire country should be resisted, even as #Ukraine is assisted with urgently needed weapons and technical help by the West, analyst @michaelh992 @LeBeckInt writes for @NEDemocracy partner @cepa. https://t.co/AtsOq0KAS5