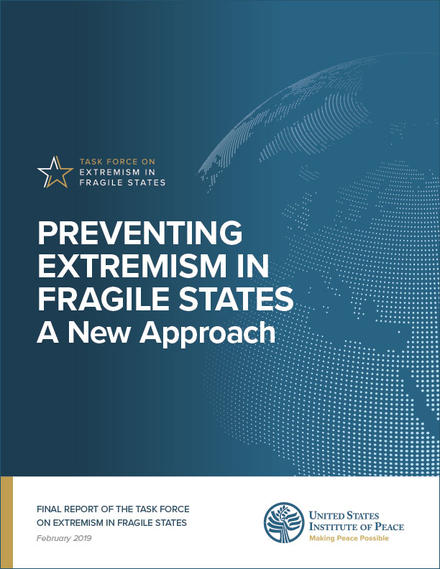 Extremism is enabled by the belief that existing indignities and suffering are the direct result of poor, undemocratic, or predatory governance, notes a new analysis. This sense of injustice aligns with a core tenet of extremist political ideology: rejection of the state in favor of a new political order.

But the goal of a preventive approach should not necessarily be to establish Western-style democracies, according to the Task Force on Extremism in Fragile States.

“Instead, in targeted countries where conditions are conducive and engagement can happen sufficiently early, preventive efforts should seek to reduce the likelihood that extremists will turn local conflicts into transnational jihads, hold territory, or establish governance,” the report states. “The success of such preventive efforts should be determined by whether national and local leaders are becoming more widely trusted within a given community or society.”

Nevertheless, a new strategy to prevent the spread of extremism must address the need to provide democracy and governance assistance, the Task Force adds:

Funding levels for democracy, human rights, and governance programs have decreased substantially over the past two decades. These programs have an important role to play in advancing freedom and democracy. Democratic backsliding in fragile states and around the world over recent years, the resurgence of authoritarianism, and the role that fragility can play as an underlying cause of extremism all require that the United States redouble its investments and diplomatic efforts to promote democratic governance.

A new strategy must also include measures to build resilience to extremism’s corrosive ideology, the report – Preventing Extremism in Fragile States: A New Approach – adds:

Building resilience requires moving beyond “countering” extremist propaganda and actively working to support universal and local values, including a strong, positive sense of local and national identity. This may include measures designed to promote democracy and personal freedom as antidotes to the totalitarian, repressive orders established by extremists. It also may mean providing vulnerable communities with meaningful choices and a voice in shaping their future.

Such programs are managed by USAID and the State Department, and by international platforms such as Hedayah, Etidal, and the Sawab Center, it adds. RTWT