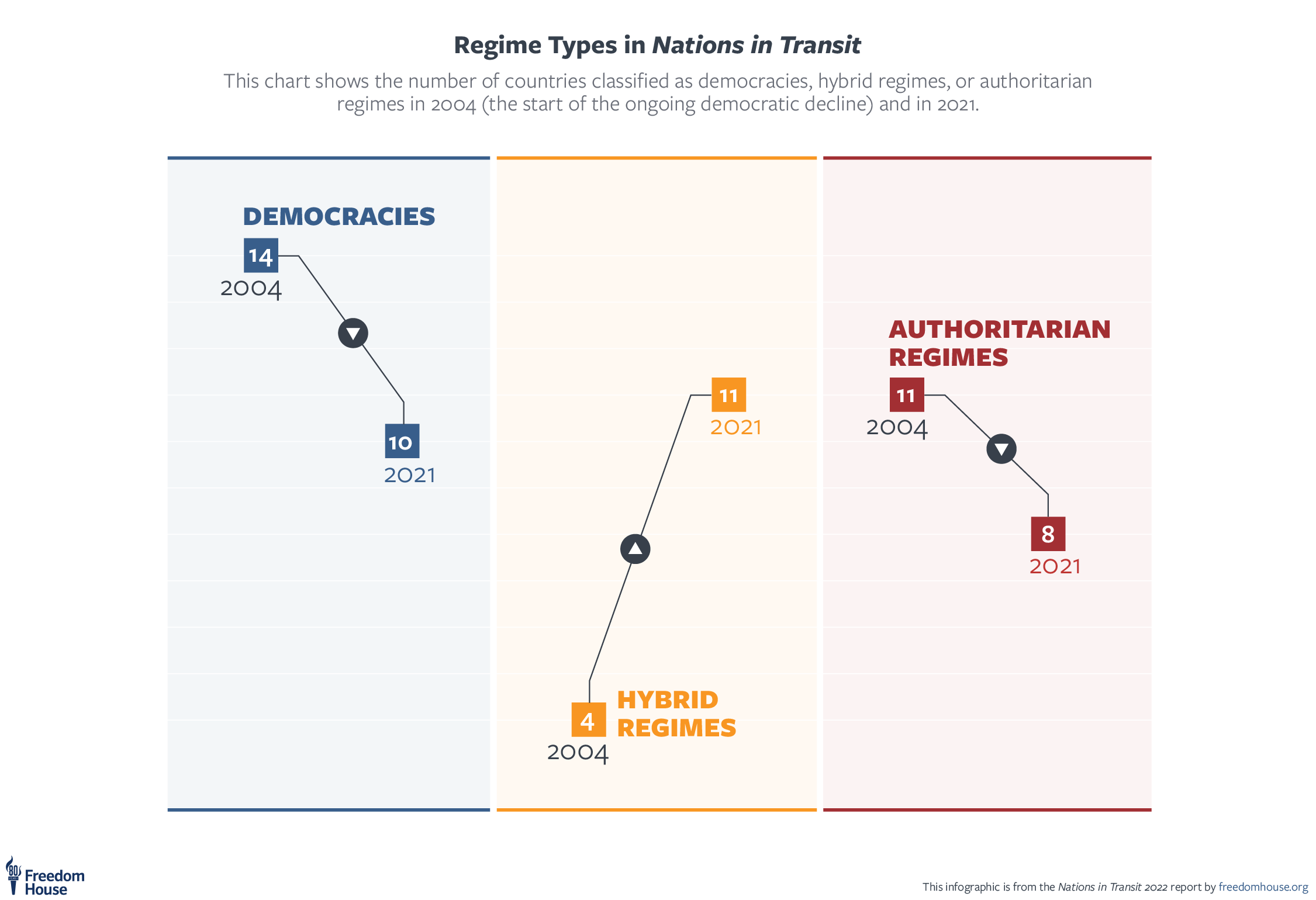 While some democratic states are degenerating into authoritarianism, others are transitioning into illiberal or hybrid models in which executive powers diminish legislative bodies, curb judicial autonomy, suffocate independent media and stifle dissent, say the authors of “Nations in Transit 2022,” which covers the region spanning from Central Europe to Central Asia.

“For the first time in the 21st century, the prevailing form of governance in the Nations in Transit region is the hybrid regime,” the report observes:

Four democracies have fallen into this gray zone since the unbroken period of democratic decline began in 2004: Hungary, Montenegro, North Macedonia, and Serbia. During the same period, three authoritarian regimes made democratic strides and joined the ranks of hybrid regimes: Moldova, Kosovo, and now Armenia. . . .

They may be democratic in the minimal sense that they feature regular, competitive elections, but their dysfunctional institutions are unable to deliver the definitive components of a liberal democracy: checks and balances, the rule of law, and robust protections for the rights and liberties of all.

“Over the past 20 years, countries that once strove for democratic ideals have increasingly fallen under the sway of authoritarian strongmen, enticed by the promise of quick fixes to complex, systemic challenges,” said Mike Smeltzer, project director of Nations in Transit. “I’m heartened by the solidarity that so many democracies have shown with Ukraine, but it will take sustained, decisive, and unified effort to stem the broader authoritarian tide and help all of these once-promising countries return to a democratic path.” 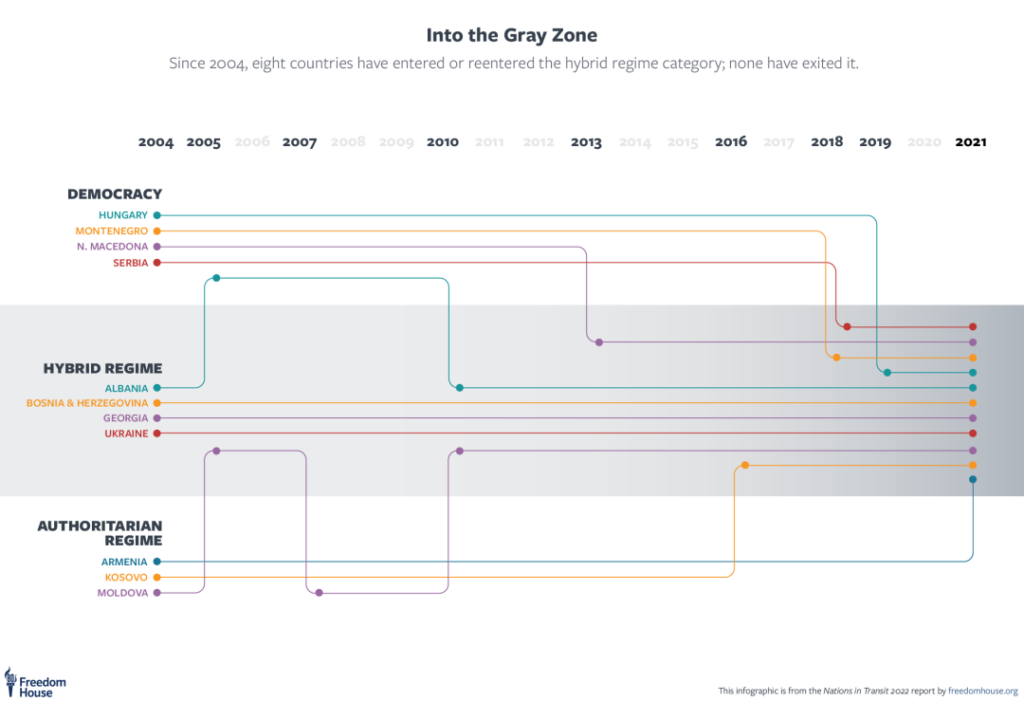 “In this emerging era, liberal democracy no longer prevails as the assumed goal of national political development,” the report notes. “Increasingly, the countries of Central and Eastern Europe and Eurasia are headed toward two different destinations: the abyss of full-blown autocracy and the gray zone of hybrid governance, where ostensibly democratic structures belie undemocratic practices.”

Freedom House found disturbing declines in the democratic criteria it employs to rate countries, including the integrity of electoral processes, the vitality of civil society, and judicial independence. Relatively robust democracies like Slovenia and Slovakia have been “buffeted by the corrosive effects of illiberalism and corruption,” while in autocracies like Belarus and Central Asia’s former Soviet republics, “longtime despots stamp out dissent and fortify themselves against perceived foreign and domestic enemies,” it states. 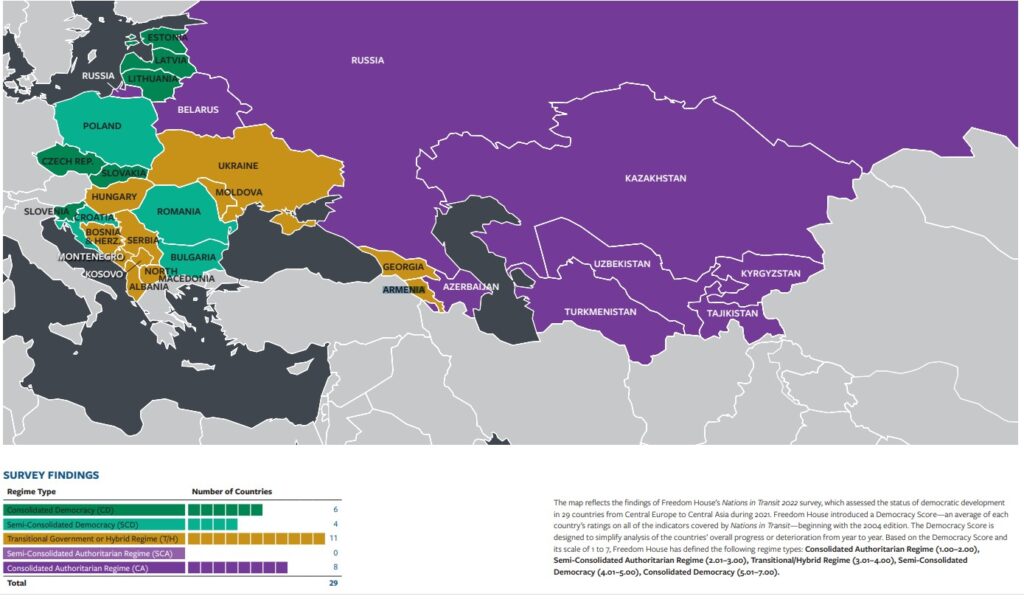 “The liberal international order is only as strong as the democracies that defend it, and the road to authoritarian resurgence has been paved with democracies’ political complacency,” said Michael J. Abramowitz, president of Freedom House.

“While the unity that democracies have shown in response to Putin’s war of conquest in Ukraine is truly remarkable, we must seize this moment of democratic awakening to counter the rise of authoritarianism not only in Europe and Eurasia, but around the globe,” he added. “Freedom’s champions, from governments to citizens, must use all the legal, economic, and diplomatic tools available to deter authoritarian aggression and lay the foundations for a safer, freer, and more just and prosperous world.”

Abramowitz told The Post that he his “hopeful that this [Ukraine] will be a turning point.” 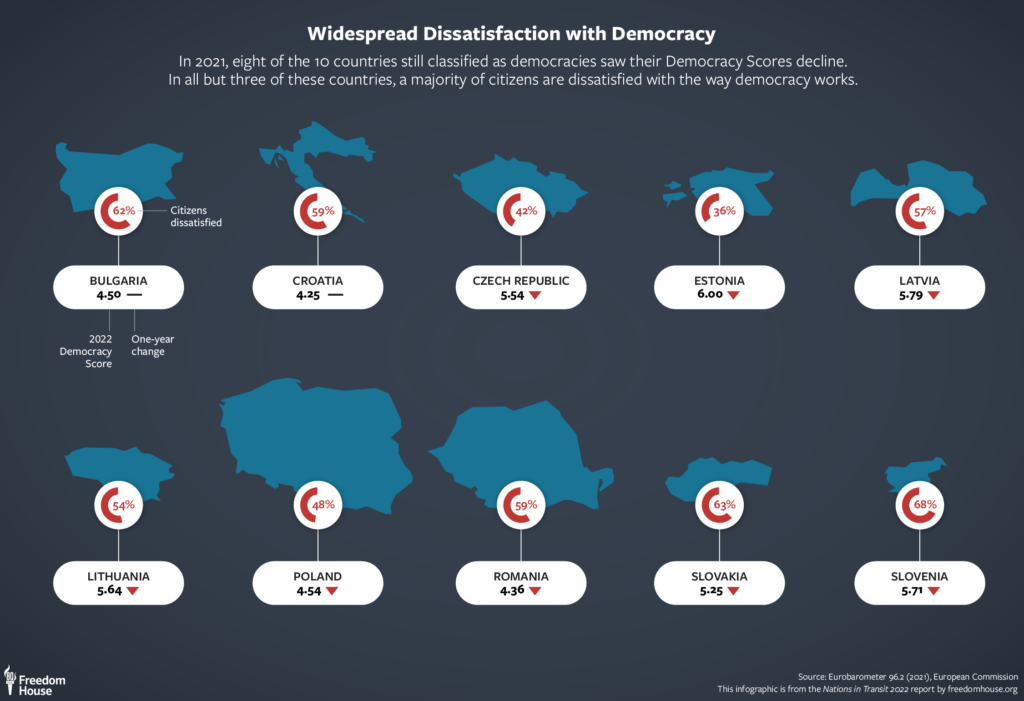