When it comes to pandemics, politics cannot be wished away, say analysts Sara E Davies and Clare Wenham. Even the most democratic country can stumble over political ideologies and nationalism when facing the strength and pace of a virus outbreak. The contemporary debate about the wearing of face masks demonstrates this in abundance. Political forces will dramatically affect the fortunes of public health bodies, the efficacy of technical advice, and faith in the normative value of international health diplomacy, they write for International Affairs.

Those of us who believe in open, inclusive and liberal democracy were already on the backfoot after years of rising authoritarianism, declining civic space and attacks on democratic norms even in countries that have been traditional champions of our values. The question now is, can the pandemic be a turning point? the Open Government Partnership’s Joe Powell asks.

That will be the focus of the Open Government Partnership’s Virtual Leaders Summit, on the margins of the United Nations 75th anniversary General Assembly this week. The UN cannot rescue multilateralism alone, and OGP needs to step up and play its role in bolstering a stronger coalition of government reformers, civil society leaders and private sector champions for democracy and open government. The reality of the past few years is that cooperation and learning between authoritarian and illiberal democracies has been highly effective, ranging from repressive NGO laws, to undermining of independent judicial institutions, and the use of disinformation to drive polarisation. RTWT 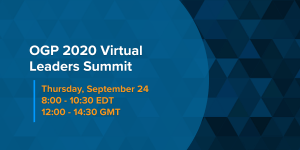 Our coalition needs to step up, which is why it is encouraging that the leaders of Argentina, France, Germany, Georgia, Italy, Nigeria and more will all be speaking at the OGP Virtual Leaders Summit, alongside civil society activists and the leadership of multilateral institutions. It is exciting that the Government of South Korea and civil society leader Maria Baron will take over as co-chairs. In the coming weeks we will also be announcing a large new intake of local government members to the Partnership.