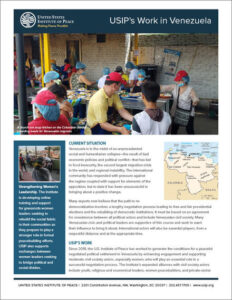 Many experts now believe that the path to Venezuela’s re-democratization involves a lengthy negotiation process leading to free and fair presidential elections and the rebuilding of democratic institutions, says a new USIP analysis.

It must be based on an agreement for coexistence between all political actors and include Venezuelan civil society. Many Venezuelan civic and political leaders are supportive of this course and seek to exert their influence to bring it about. International actors will also be essential players, from a respectful distance and at the appropriate time, the authors suggest.

Why did efforts to secure a democratic transition in Venezuela fail? asks National Endowment for Democracy board member Elliott Abrams, former Special Representative for Iran and Venezuela. The answers could shed light on conditions and policies for advancing democracy in other states and contexts, he told an American Purpose meeting this week, outlining 10 key factors to explain the policy failure:

The Venezuelan Judiciary and Crimes Against Humanity: Justice or Impunity?