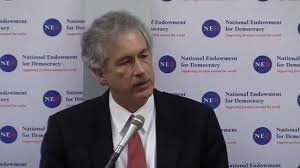 We live in a new reality: America can no longer dictate events as we sometimes believed we could, especially given the damage to its values, image, and influence, argues William J. Burns (right), the President of the Carnegie Endowment for International Peace, former deputy secretary of state, and author of The Back Channel: A Memoir of American Diplomacy and the Case for its Renewal.

it is time to move beyond the debate about retrenchment or restoration and imagine a more fundamental reinvention of America’s role in the world, he writes for The Atlantic:

We can’t afford to just put more-modest lipstick on an essentially restorationist strategy, or, alternatively, apply a bolder rhetorical gloss to retrenchment, adds Burns, a board member of the National Endowment for Democracy (NED). We must reinvent the purpose and practice of American power, finding a balance between our ambition and our limitations. RTWT

To continue the alliterative trend, Burns could have added a further group – the rejectionists who dispute the legitimacy of advancing democracy abroad.

How can we continue to tell other nations what to do when our own democracy is suffering from mediocrity and decay? asks William S. Smith, Senior Research Fellow and Managing Director of the Center for the Study of Statesmanship at The Catholic University of America, and the author of Democracy and Imperialism.

Thirty years ago, as the Cold War was coming to an end, Jeane Kirkpatrick warned us that, “a good society is defined not by its foreign policy but its internal qualities.” She advised Americans to come home from their global commitments and to work to “make a good society better.” Our leaders of both parties ignored her advice, and we are seeing the results, he writes for The American Conservative.