CSIS, in partnership with @NEDemocracy and @SunnylandsNews, outlined 10 points to advance democratic governance in the Indo-Pacific.

The Indo-Pacific region is emerging as the epicenter of a new debate over how states should be organized, according to a new report from Center for Strategic and International Studies (CSIS) – The Sunnylands Principles on Enhancing Democratic Partnership in the Indo-Pacific Region – by analysts Michael J. Green and Amy K. Lehr:

Democratic governance is under strain in Asia from challenges such as: the rise of populism and political polarization; misinformation campaigns and the use of corruption for elite
capture; inconsistent messages and lack of cohesion among democracies; new capacities
for government surveillance; geopolitical pressures on states in the region from great
power competition; declining press freedom and closing civil society space in many
parts of the region; and inequality. It is therefore critical to establish a broad and
inclusive partnership and vision to advance democratic governance in the Indo-Pacific. 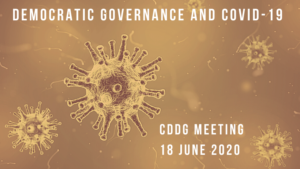 CSIS partnered with the National Endowment for Democracy (NED) and the Annenberg Foundation Trust at Sunnylands to convene leading thinkers to discuss strategies to advance democratic governance and human rights in the region. The subsequent report includes a statement of principles endorsed by participants, including:

Recognize that democracy is diverse. This vision for democratic partnership in the
region seeks to ensure that independent states—large and small—have equal rights
and capacity to protect their sovereign interests as their population sees fit. It does
not lay out a monolithic view of democracy, relying instead on local ownership
and vision. It seeks to support the broad principles that people should have a say
in how they are governed and enjoy basic liberties……

Actively support democracy at home and in the neighborhood. Each democracy in
the Indo-Pacific is already supporting democratic development and culture at home
and in their region in unique and significant ways. States should coordinate to
ensure a comprehensive approach that includes the diverse actors and mechanisms
needed to advance responsive and accountable governance. Democracies should
support cross-border learning among different peoples and groups in the region….

Adopt a holistic approach. Support for democratization should be integrated into
all aspects of interstate relations, including diplomacy, defense, economic policy,
development cooperation, and trade ties….RTWT