With the United States and its European allies now struggling to manage the threat of a Russian attack on Ukraine, the 1938 appeasement of Nazi Germany has become an attractive historical analogy, since that was the moment when the post-World War I cold war mutated decisively, supposedly making a hot conflict inevitable, argues Harold James, Professor of History and International Affairs at Princeton University. Consequently, a “whiff of Munich” is in the air.

Russian leader Vladimir Putin simply “does not want Ukraine to be a democracy,” says former Deputy National Security Advisor Ben Rhodes. “He wants Ukraine to either be a part of Russia or at least be controlled by Russia,” he tells MSNBC’s Stephanie Ruhle.

“There’s no question weakness is a provocation to authoritarian figures like Vladimir Putin, and the threat of sanctions or financial support for Ukraine will not be enough to deter an invasion,” Cornyn said. “This legislation would allow us to once again serve as the arsenal of democracy and provide Ukraine with lethal weapons against the Russian threat to its sovereignty.”

“On the heels of a bipartisan delegation I helped lead to Ukraine, it’s clear the U.S. must take decisive and urgent action to support our Ukrainian partners and deter a Russian incursion,“ said Shaheen.

Meanwhile, Democrats in the House of Representatives hope to expedite an extensive aid package that would entail a substantial increase in U.S. security assistance to Kyiv and prepare substantial new sanctions on Russia.

The proposed legislation notes that Russia’s “aggression and malign influence…is a threat to the democratic sovereignty of Ukraine” and includes provisions for a “plan to support democracy and the rule of law in Ukraine, which shall include efforts to build on progress made on the establishment of anti-corruption institutions, land reform, local governance, and digitalization.”

The crisis “must not be viewed as a contest between large geopolitical entities,” says Oleksandr Sushko, executive director of Ukraine’s International Renaissance Foundation. “It is a contest between freedom and tyranny, and the West must not find itself humming along to the Kremlin’s song.”

There is one fundamental reason why the United States and the rest of the democratic world should support Ukraine in its current fight with Putin’s Russia: Ukraine is a real, but struggling, liberal democracy. On two occasions, during the Orange Revolution in 2004 and the Revolution of Dignity in 2014, Ukrainian civil society came into the streets in massive numbers to protest corrupt and unrepresentative governments, he writes for American Purpose:

This is the real reason that Vladimir Putin is preparing to further invade Ukraine. He sees Ukraine as an integral part of a greater Russia….. But the deeper problem for him is Ukrainian democracy. He is heavily invested in the idea that Slavic peoples are culturally attuned to authoritarian government, and the idea that another Slavic state could successfully transition to democracy undermines his own claims for ruling Russia.

Ukraine presents zero military threat to Moscow, Fukuyama notes; it does, however, pose an alternative ideological model that erodes Putin’s own legitimacy.

Since the breakup of the Soviet Union when Ukraine gained its independence, the U.S. has had diplomatic relations with the country, The Wall Street Journal reports. The U.S. is eager to see Ukraine thrive as a democracy in the face of what the State Department describes as “continued Russian aggression.”

Russia is seeking to violate “the fundamental rules that underpin the international order,” said U.S. Secretary of State Antony Blinken. “In challenging them, Russia seeks to challenge the international system itself and to unravel our transatlantic alliance, erode our unity, pressure democracies into failure.”

“Nothing about Ukraine without Ukraine,” he added.

The consequences of failing to have a grand strategy for navigating 21st century national security challenges are evident in the current Ukraine crisis, which is being dealt with piecemeal rather than within a framework that identifies and clarifies our broad strategic goals. Such a framework should rationalize our policies not only toward Russia and Ukraine, but toward China, the Western alliance and the rest of the world, according to analysts James P. Farwell and Michael Miklaucic.

A grand strategy should clarify what relationship we desire with Russia that is achievable, they observe:

Is the goal stability in Europe? Is it preserving democracy in at least western Ukraine? Is it motivating Russia to avoid joining China in an alliance against the U.S. and the West? …. How do we counter China’s 2049 vision for global economic supremacy or its rejection of an international rules-based order that supports democracy and freedom of expression? What ways and means should we employ to achieve that end?

It would seem there is trading space for a diplomatic progress, The New York Times’ David Sanger suggests:

While the United States says it will never abandon the NATO “open door” policy — which means that every nation is free to make its own choice about whether it seeks to join the Western alliance — the reality is clear: Ukraine is so corrupt, and its grasp of democracy is so tenuous, that no one expects it to be accepted for NATO membership in the next decade or two.

Putin’s aims (“to evict the United States from Europe”, in the crisp words of former US official Fiona Hill) can’t be reconciled with American hegemony, notes FT analyst Janan Ganesh. Putin’s aggression has found support from other autocratic leaders, but some U.S. observers suggest “liberals should tone down their fear of collusion among the world’s different strongman movements,” he adds, noting that the “idea of a Nationalist International gained credence when the US, Russia, Turkey, Brazil and the Philippines had leaders who answered to that ideological label.”

Maintaining a common response from the transatlantic democracies could prove more complex should Putin’s next moves against Ukraine fall short of a full invasion, says Daniel Fried, a National Endowment for Democracy (NED) board member.

Putin appeared to not be negotiating but offering an ultimatum, Michael McFaul, a former U.S. ambassador to Moscow, recently wrote for The Post. “And ultimatums, as we know from history, are often pretexts for annexation or war.”

We’ve got to interact diplomatically, very broadly, globally,” said Admiral James Stavridis, supreme allied commander to NATO in Europe during the Obama administration. “Let’s try and get this out of a Russia versus U.S. context and get it into a context of Russia versus the democratic world. I think it’s moving in that direction,” he told NPR.

Meanwhile, the Russian stock market plunged more than 10% on Monday but was 7% down when trading concluded. Since the start of the Russian military buildup on the borders of Ukraine in October, the market has lost more than a quarter of its value, VOA adds. 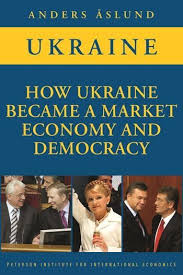 The market could fall much further if the geopolitical confrontation between Russia and Western powers over Ukraine worsens, said Anders Aslund, chairman of the Warsaw-based International Advisory Council at the Center for Social and Economic Research.

The United States has committed an increasing amount of foreign assistance to Ukraine over the years — with no other European or Eurasian nation receiving more since 2015, according to data from ForeignAssistance.gov., AXIOS reports:

When it comes to military support in particular, the U.S. committed to more than $600 million just last year — and more than $2.7 billion since 2014. With the current threat from Russia, Ukraine — and Congress — are now pushing for more. 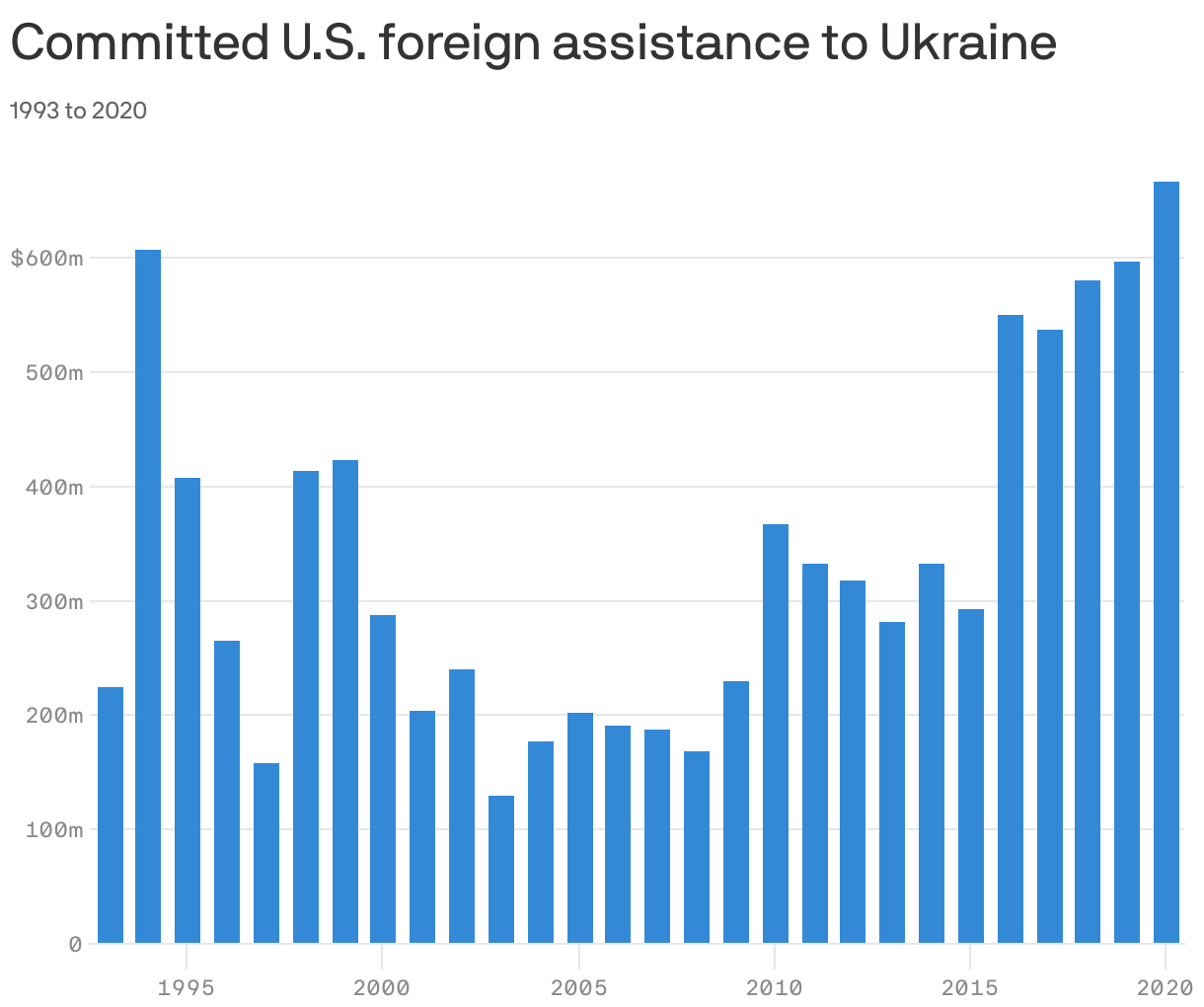