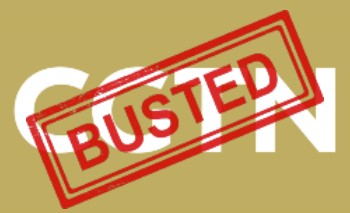 Britain’s media regulator on Thursday revoked a Chinese TV licence after it concluded that the Chinese Communist Party had ultimate editorial responsibility for the channel while Beijing lodged an official complaint over the BBC’s COVID-19 coverage, Reuters reports:

Britain and China have been exchanging barbs for months over Beijing’s crackdown on dissent in Hong Kong, concerns over the security of Huawei technology and the treatment of Uighur Muslims in China’s remote Xinjiang region. After an investigation, the British regulator Ofcom concluded that China Global Television Network’s (CGTN), an English language international Chinese channel, was ultimately controlled by the Communist Party.

“Our investigation showed that the licence for China Global Television Network is held by an entity which has no editorial control over its programmes,” Ofcom said. “We are unable to approve the application to transfer the licence to China Global Television Network Corporation because it is ultimately controlled by the Chinese Communist Party, which is not permitted under UK broadcasting law.”

In a separate case, Ofcom said it expects to decide soon on sanctions for CGTN for breaching impartiality rules in coverage of Hong Kong pro-democracy protests, AP adds.

The ruling represents a major setback to the CCP’s projection of what the National Endowment for Democracy (NED) terms China’s sharp power.

“The decision by Ofcom sends a strong signal that U.K. regulations apply equally to all,” said Safeguard Defenders, a human rights group that filed the complaint against CGTN, adding that the network was pivotal to the Communist Party’s “planned expansion of soft power and influence in Europe.”

The Chinese Communist Party (CCP) is increasingly complementing its economic leverage with efforts to shape the information space to protect its strategic interests in individual countries and advance its preferred narratives globally, according to a new analysis.

The CCP has expanded its use of tactics detailed in the first report to shape the media environment: content sharing arrangements that allow for official propaganda to be printed in local media as authoritative news on China, all-expenses-paid training tours for journalists, and Chinese investment in local radio and television stations to cultivate a global media network of pro-China voices, says a report from the International Republican Institute’s (IRI) Building Resiliency for Interconnected Democracies in Global Environments (BRIDGE) initiative.

A World Safe for the Party: China’s Authoritarian Influence and the Democratic Response, analyzes influence tactics the Chinese Communist Party (CCP) has leveraged to protect its global interests and export its authoritarian model worldwide. Country case studies on Nepal, Georgia, Greece and Montenegro, plus in-depth analyses of Kenya and Panama, expose the impact of CCP influence operations on fragile democracies.

“The Chinese Communist Party has expanded its influence in vulnerable countries, relying on economic leverage and information manipulation to shape views and policy toward China,” said David Shullman, IRI Senior Advisor and editor of the report. “These efforts weaken democratic institutions while supporting illiberal actors and ideals.”

Together with 13 case studies on Chinese malign influence contained in IRI’s June 2019 report, Chinese Malign Influence and the Corrosion of Democracy, this latest research reveals the different methods by which China undermines democracy around the world.

The BRIDGE initiative, funded by the National Endowment for Democracy (NED), works to bolster democratic resilience to foreign authoritarian influence.

The OFCOM decision was “historically significant,” and “justice is finally served,” said Simon Cheng, a former employee of the British Consulate in Hong Kong who said Chinese security officers tortured him in 2019 and forced him to confess to soliciting prostitution, the Times adds.

While Beijing’s “wolf warrior” approach has attempted to thwart negative coverage of China, particularly around the initial handling of the coronavirus pandemic and human rights abuses, it has also motivated civil society groups to ban together in resistance, the IRI report adds.

“Despite CCP scare tactics, the case studies in this report suggest growing democratic resilience in nearly all regions of the world,” said IRI President Daniel Twining. “Equipped with this research, both governments and citizens can continue resisting the tide of authoritarianism in pursuit of a world where democratic institutions thrive and political freedoms are respected.”

Mr. Cheng, who was given asylum in Britain last year, filed a complaint with Ofcom after CGTN published the confession on its website. “It is clear that the mouthpiece of CCP totalitarian regime will no longer have a foothold in the U.K.,” he said in a statement posted on Facebook.

The U.S. is committed to pushing back against Chinese aggression, an administration official said this week.

“We know that China is engaged in a range of conduct that hurts American workers.   It blunts our technological edge, it threatens our alliances and influence in international organizations, and China is engaged in gross human rights violations that shock the conscience,” he told VOA.

“So we will counter China’s aggressive and coercive actions, sustain our key military advantages, defend democratic values, invest in advanced technologies, and restore our vital security partnerships,” he added.

Chinese TV kicked out of the UK https://t.co/Gf7DqtpkAq