China‘s President Xi Jinping is expected to push through an historical resolution at a key Communist Party gathering next week, cementing his authority and legacy and strengthening his case for a precedent-breaking third term starting next year, Reuters reports:

A resolution on the “important achievements and historical experiences of the party’s 100 years of struggle” will be discussed and almost certainly ratified by the ruling Communist Party’s 300-plus member Central Committee when it meets Nov 8-11 for the sixth and penultimate plenum of its five-year term.

“This resolution is a further move by Xi to consolidate power and lay the groundwork for a third term,” said Yang Chaohui, who lectures on political science at Peking University.

“The purpose of the resolution is to cement Xi’s new approach – and close the door on Deng’s reform era,” said Trey McArver, a partner at Beijing-based consultant firm Trivium. “This means doubling down on China’s one-party political system, rejiggering the economy to a more high-quality and inclusive growth model, and being more assertive in global affairs.”

A newly amended criminal code “is a sign of the establishment of an absolute political totalitarianism,” said Wu Qiang, an outspoken political analyst in Beijing.

The code, that punishes the slander of China’s martyrs and heroes. is being enforced with a revolutionary zeal as part of an intensified campaign under Xi, to sanctify the Communist Party’s version of history — and his vision for the country’s future, Steven Lee Myers writes for the Times: 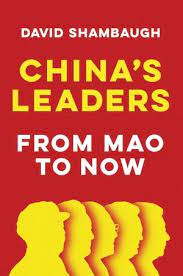 The Cyberspace Administration of China, which polices the country’s internet, has created telephone and online hotlines to encourage citizens to report violations. It has even published a list of 10 “rumors” that are forbidden to discuss….. The party once could rely on the financial inducements of a booming economy and coercive control of the security state to cement its rule, but now appears to be using political and historical orthodoxy as a foundation, said Adam Ni, a director of the China Policy Center in Australia and editor of China Story.

“There are limits to these tools,” he said of the economy and security state. “They need the moral — the moral legitimacy to maintain their rule.”

It is not China but Russia that presents the chief current threat to democratic institutions in the United States and Europe, says a leading analyst.

Critics of the new Washington consensus about China have framed it as threat inflation, arguing that a softer approach based on cooperation and common interests will yield better results. That is shortsighted, argues Richard Fontaine, CEO of the Center for a New American Security. It is not China but Russia, for example, that presents the chief current threat to democratic institutions in the United States and Europe, he writes for Foreign Affairs:

Since the early years of this century, groups backed by the Russian government have twice meddled in U.S. presidential elections and launched cyberattacks, disinformation campaigns, and other forms of interference in some 27 different countries. Yet until now there has been no collective effort to defend democratic political systems against Russian infiltration, even among the multiple countries that have been subject to direct election interference.

A global survey conducted at the end of 2020 among the affiliate unions of the International Federation of Journalists (IFJ) indicates that China has managed to use the pandemic to boost its image in global media coverage, Raksha Kumar writes for Oxford University’s Reuters Institute:

The Chinese regime has built a sophisticated strategy to portray the country’s leadership in a good light. It has spent around USD 6.6 billion since 2009 in strengthening its global media presence. According to Bloomberg News, between 2008 and 2018, its investment into media  alone amounted to $2.8 billion. China regularly conducts exchange programs for foreign reporters from several countries, organizes training for journalists in Chinese cities, and holds regular discussions with foreign journalists and Chinese media unions.

Beijing and Moscow prevent freedom of expression within their own borders, while their state-controlled news organizations are more active than ever abroad, said Christopher Walker, Vice President, Studies & Analysis at the National Endowment for Democracy (NED).

Is US foreign policy too hostile to China? Foreign Affairs asks.

Anne-Marie Brady, Professor at the University of Canterbury and author of Marketing Dictatorship, strongly disagrees.

“The Biden administration’s China policy does not seek to stop the rise of China or overthrow the Chinese Communist Party but to prevent China from achieving regional or global dominance,” adds Columbia University’s Andrew Nathan, a former NED board member, who also disagrees with the proposition.

But Minxin Pei, a Professor at Claremont McKenna College and a current NED board member, takes a neutral position.

“At the very moment that China aspires to global influence, the United States appears to be backing away from the global stage to devote itself to the Indo-Pacific above all other regions,” CNAS’s Fontaine contends. ” Only by balancing the Chinese threat with its interests in other regions and issues can the United States effectively contest Chinese power—and strengthen its own position in the world.”