Allegations of Azerbaijani attempts to buy support from members of the Parliamentary Assembly of the Council of Europe (PACE) gained significant traction last month with the publication of a report commissioned by the assembly, Transitions Online reports:

In the context of “corruptive activities in favor of Azerbaijan,” the report “established that there was a strong suspicion that certain current and former members of PACE had engaged in activity of a corruptive nature.” Some PACE members “have been accused of accepting money, jewelry, prostitutes and paid hotel stays in oil-rich Azerbaijan,” the New York Times reports.

Western politicians’ complicity with the Baku regime’s corruption was highlighted in detail by Emin Milli (above), director of Meydan TV in a must-view “I Accuse” statement reminiscent of Emile Zola.

In September 2017, the Organized Crime and Corruption Reporting Project (OCCRP) and its partners revealed a multi-billion dollar money laundering and corruption scheme called the Azerbaijani Laundromat (see below) and detailed how the Azerbaijani government used a slush fund to bribe European politicians, including CoE parliamentary assembly members, in addition to laundering money through major European financial institutions and U.K.-based shell companies.

Head of state Ilham Aliyev and his wife Mehriban Aliyeva, have been described as the “embodiment of nepotism and kleptocracy” in Azerbaijan.

The Laundromat provides a tantalizing glimpse into the way this kleptocracy works, wrote Khadija Ismayilova (left), who has been jailed for her reporting on high-level corruption.

Milli testified before the Commission on Security and Cooperation in Europe (CSCE) briefing on “Democracy Deferred: The State of Elections and Fundamental Freedoms in Azerbaijan,” alongside Audrey Altstadt, professor of history at the University of Massachusetts at Amherst; and Maran Turner, executive director of Freedom Now. 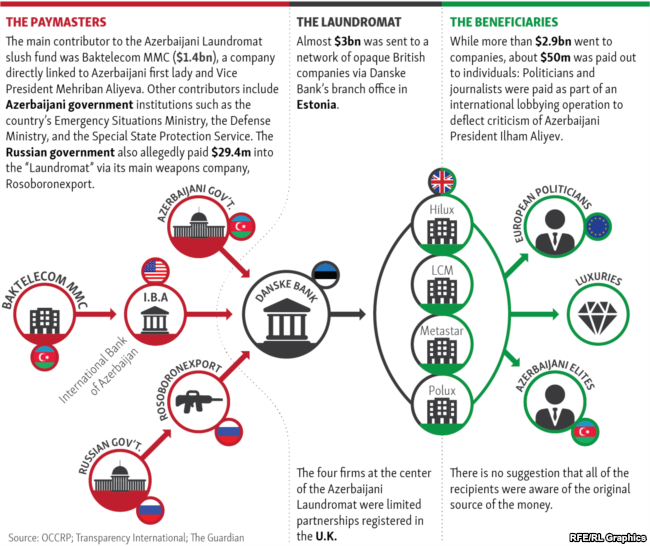