Pakistani human rights activist Gulalai Ismail had just landed in Islamabad airport when she was detained by federal agents. After nine hours, authorities released the renowned activist on bail but confiscated her passport to ensure she stayed put. Authorities placed her on the Exit Control List, barring her from leaving the country, based on allegations that she had participated in “antistate” activities stemming from her participation in a rally in August, writes Frud Bezhan, a correspondent for RFE/RL who covers Afghanistan, Iran, and Pakistan:

The award-winning activist has been a critic of military operations that have killed thousands of people and uprooted millions in the country’s northwestern tribal regions over the past decade.
The 33-year-old has denied the allegations, claiming that they are part of an ongoing campaign to stifle dissent in the South Asian country. Dozens of rights defenders and journalists critical of the authorities have been detained, arrested, or have fled the country out of fear for their safety in recent years. Ismail said the allegations against her are “part of a malicious attempt by state actors to silence human rights defenders. 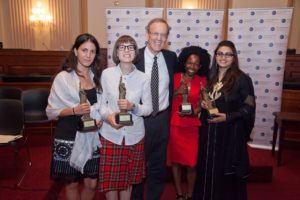 “I could face prison simply for speaking out about human rights,” she told RFE/RL.

Ismail is the co-founder and chairperson of Aware Girls, which aims to empower and educate young women on rights and leadership in Pakistan. The group challenges the culture of violence and oppression of women in north-west Pakistan’s rural Khyber Pakhtunkhwa region. She also chairs the Seeds of Peace network, founded in 2010, which trains youth in human rights and political leadership, promotes women’s political participation, and encourages religious tolerance.

A recipient of the National Endowment for Democracy’s 2013 Democracy Award (above, far right) the Fondation Chirac Peace Prize, the International Humanist of the Year Award, the Commonwealth Youth Award for Excellence in Democracy, and the Anna Politkovskaya Award, she is also a Board Member of the Women’s Global Network for Reproductive Rights and a member of the Asian Democracy Network.