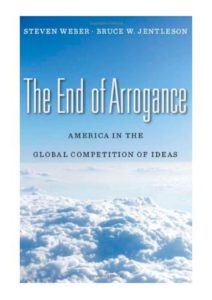 While well short of grand strategy, what’s needed is a foreign policy “right-sizing” that fits the realities of the twenty-first century world, he writes for Democracy: A Journal of Ideas:

Americans aren’t turning isolationist: Only 29 percent opted to “stay out of world affairs,” among the lowest percentages in the 45 years the Chicago Council on 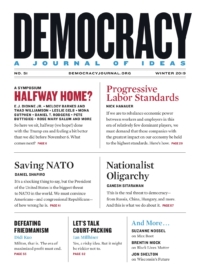 Global Affairs (CCGA) has been polling this question. But as a recent Center for American Progress (CAP) study found, “traditional language from foreign policy experts about ‘fighting authoritarianism and dictatorship, ‘promoting democracy,’ or ‘working with allies and the international community’ uniformly fell flat.”

Democracy versus autocracy is not a radical departure from traditional Democratic foreign policy, Brookings analyst Thomas Wright writes for The Atlantic:

Many Democrats believe that diplomatic and economic tools are more benign than and preferable to the deployment of troops and deterrence, so it is no surprise to see progressives embrace their use. But the reason Russia and China have a problem with the Western order has as much to do with soft power as with hard power. It is the prospect of color revolutions, fed by a free press, open information networks, anti-corruption measures, and the wide appeal of democratic ideas that scares Moscow and Beijing the most.

“If the progressives succeed, we could be on the cusp of a revolution in U.S. foreign policy along the lines of the rise of internationalism in the 1940s or neoconservatism in the 1980s,” Wright suggests.

Right-sizing entails a foreign policy better scaled than traditional Democratic internationalism to both the scope and limits of American power and influence, and with limited but significant changes in priorities and strategies, adds Jentleson, co-author of The End of Arrogance: America in the Global Competition of Ideas. Six key elements frame this strategy, he adds…..RTWT