2018 marked the 13th consecutive year that democracy has declined in the world, according to the latest Freedom in the World report from Freedom House.

It is a period that has seen the rising power and assertiveness of authoritarian states like China, Russia, and Iran; the backsliding of once democratic countries like Turkey, Venezuela, the Philippines, Thailand, and Hungary; and the rise of populist and nationalist forces in the established democracies, National Endowment for Democracy president Carl Gershman told the Canadian parliament’s Standing Committee on Foreign Affairs and International Development.

Autocratic regimes have tried to repress independent groups working to promote greater freedom and to cut them off from international assistance from institutions like the National Democratic Institute (NDI) and the International Republican Institute (IRI), NED’s party institutes, he added in testimony to inform Canada’s House of Commons as it deliberates on measures to advance democracy.

The work nonetheless goes on and has even been expanding, which is a testament to the determination and the courage of indigenous groups who want to continue to work and receive needed assistance despite the risks, said Gershman:

We should not forget that despite all the backsliding, there have also been important gains over the past year in Ethiopia, Armenia, and Malaysia.  NED was providing support to democrats in all of these countries before the political openings, which positioned us to quickly scale up our support once the openings occurred.  This is an example of our commitment and ability to navigate around the obstacles created by authoritarian regimes and to continue to provide assistance while taking care to protect the safety of our grantees.

Democracy assistance can facilitate democratic transitions, others suggest, not as a form of externally-driven regime change or political engineering, but by empowering indigenous actors to pursue locally-based agendas. 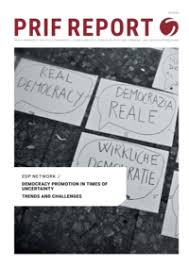 Canadian decision-makers should consider the distinction between top-down and bottom-up approaches to democracy assistance drawn in a recent report from the European “External Demo­cracy Pro­motion” (EDP Net­work) – Democracy Promotion in Times of Uncertainty – Trends and Challenges, the NED’s Gershman suggests.

In essence, the top-down approach supports the incremental reform of, for example, the judiciary or other institutions, often in a technocratic way and in partnership with governments that may be only superficially committed to democratic reform.  The alternative bottom-up approach responds to and seeks to empower local actors to address immediate challenges they face

and to develop their capacity to promote reform and institutional accountability over the long term.

The report recommends a “substantial strengthening of the bottom-up instruments” such as the European Endowment for Democracy, an organization modeled on NED that the report says has been effective in dealing with the current difficult challenges.