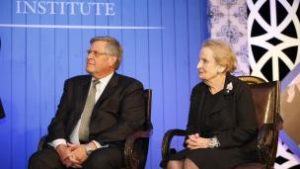 The world is a much freer and more prosperous place than it was 30 years ago when Kenneth Wollack came to the National Democratic Institute (NDI). The United States, through a variety of institutions, has consistently made democracy, good governance, and human rights important parts of our foreign policy across administrations, the CSIS writes:

Mr. Wollack has been at the forefront of many of these issues during his time as President of NDI [a core institute of the National Endowment for Democracy]. There has been much progress achieved in the world and Mr. Wollack, as well as NDI, have been a witness to and a positive force for change; however, in recent years, there has been a so-called “democratic recession,” presenting new challenges going forward. He recently announced his retirement which will take place once a successor is in place later this year. In this armchair discussion, Mr. Wollack will share his thoughts on this progress and continued efforts to make the world a better place after he leaves his current position. Please join us on February 27 for this important event.

Former Secretary of State Madeleine K. Albright, the founding Vice Chair of NDI and Chairman since 2001, will introduce the discussion by sharing her insights on the intersection between American values and interests.

This event will be webcast live from this page.