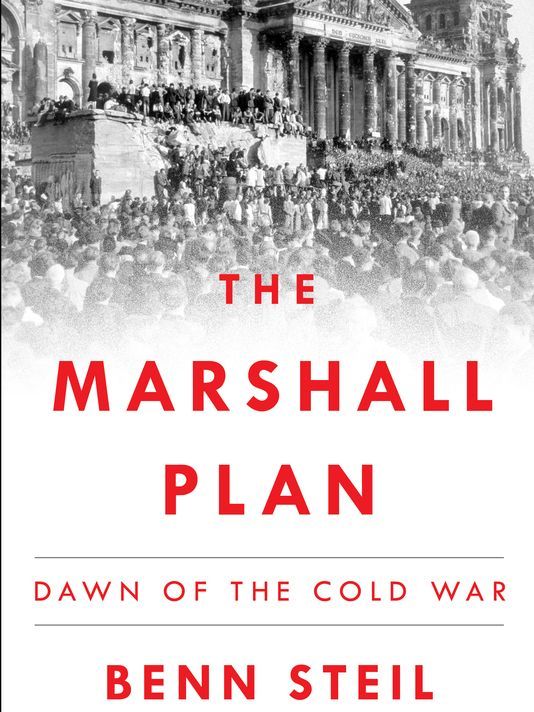 The post-war consolidation of Western Europe’s fragile democracies was secured through an unprecedented initiative that matched interests to ideas and established the institutions that underpinned the post-war liberal order.

Benn Steil’s book, “The Marshall Plan: Dawn of the Cold War,” is a “thoroughly researched and well-written account of the crucial years of 1947-49 and formation of the Marshall Plan,the American initiative that rebuilt Europe and placed a geopolitical check on Soviet influence after World War II,” USA Today reports.

Much like Kleenex and Xerox, the term “Marshall Plan” has taken on a generic meaning in our lexicon. Today, we think of using a Marshall Plan to bolster any ailing nation’s economy and to bring it into the democratic capitalist fold, notes Paul D Pearlstein. Thanks to the economic growth Marshall’s strategy unleashed, Western Europe stayed firmly on the democratic, capitalist path, adds another reviewer.

“A European alliance of capitalist democracies, underwritten by U.S. aid, would help ensure that Communist parties could not exploit the hardships of the early postwar years to sell their publics on a Soviet-backed agenda,” Steil notes. “This, in turn, would ensure that the United States did not have to resort to a massive remilitarization to prevent the loss of its most important foreign markets,” he writes for The Washington Post:

Despite Western Europeans having to live in the shadows of U.S. and Soviet nuclear missiles, the fact that the United States had been willing to support and protect their democracies — including parties of the left with whose economic agendas Washington disagreed — kept the transatlantic community intact.

As Steil details in his brilliant book, the Soviets had shown ever-greater intransigence throughout 1946 and 1947 in regard to all proposals for the economic rebuilding of Europe and the political reconstitution of the defeated Germany, Yale University’s Paul Kennedy notes.  The exceptions, to be sure, were schemes of theirs that calculated to have all Germany fall into the Eastern orbit, he writes in a Wall Street Journal review:

The best and fastest way to counter these Russian ploys, American officials like George Kennan and Charles Bohlen contended, was to deploy economic weapons to a grand-strategical end. Washington now would deftly secure its larger purpose by approaching willing European governments—the British and the French in the lead, but, really, all the rest, all in a position to say “yes”—and inviting them to come up with recovery plans the United States would pay for. Faltering European democracies would be given a great psychological boost, and the generosity of America would be seen in contrast to the Soviet plundering of its zone.

But in a February 12 piece for Foreign Policy, Steil posits that Russia’s conflict with the West is about geography—not ideology. An unappreciated reason for the Marshall Plan’s success was the Truman administration’s willingness to disengage from those parts of Europe it could not defend without excessive loss of American blood and treasure, he adds.

Steil “contends that, although the Americans held the purse strings and emphasized the need for western European economic integration, they did not dictate the specific paths to recovery charted in Britain, France and Italy,” The FT’s Tony Barber adds:

Some US policymakers were unenthusiastic about the UK Labour government’s nationalisation and welfare state programmes, given Britain’s near bankrupt condition. Others grasped that in some respects a strong, reforming government of the democratic left was the best riposte of all to the challenge of communism.

The Marshall Plan provides critical context into understanding today’s international landscape, Steil contends. “Many of the institutions we now take for granted as natural elements of the liberal postwar order—in particular, the European Union, NATO, and the World Trade Organization—were forged under U.S. leadership during the early Marshall years,” he writes.

“In the wake of the devastation of WWII, the Marshall Plan and NATO provided western Europe with [economic and physical] security and kept it firmly on the democratic, capitalist path,” Steil writes. “Yet in the quarter century since the passing of the Soviet Union,” he contends, “Grand Strategy has been set aside in favor of improvisation to pacify competing interests.”

The Marshall Plan worked because a brilliant group of Americans saw how some specific economic measures could be implemented, practically and fairly swiftly. But the boldness of the gesture stirred men’s minds. An extraordinary alliance between the presidential administration and the American Congress sold the public on the plan, Yale’s Kennedy adds.

“Great acts of statesmanship,” Mr. Steil concludes, “are grounded in realism no less than idealism. It is a lesson we need to relearn.”