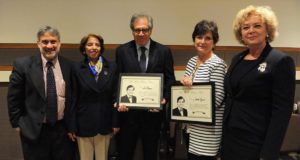 The Trump administration has ordered the State Department and the United States Agency for International Development to freeze much of the remaining money for foreign aid this year, in a move that suggests the funding could be cut altogether, The New York Times reports:

The decision, issued in a letter by the Office of Management and Budget, covers a broad range of foreign aid that Congress had already approved and halted the agencies’ ability to distribute what the decision’s critics estimated as of Saturday to be $2 billion to $4 billion of funding.

Kelly Knight Craft, the new U.S. permanent representative to the U.N., could potentially make a worthwhile contribution, analyst Richard Gowan writes for World Politics Review: the war in Yemen, the transition to democracy in Sudan, and securing stability in the Democratic Republic of Congo. However, the U.N.’s role in the current, halting transition to democracy in Sudan after the fall of President Omar al-Bashir is more limited, he adds.

Diplomacy must be part of a comprehensive and adaptable democracy strategy, including technical assistance, reporting and advocacy, public and private diplomacy, educational and cultural exchanges, and punitive measures, according to Paula J. Dobriansky, a former
Under Secretary of State for Global Affairs. It is bilateral and multilateral. It is willing to consider and use a wide array of means to achieve a common end: the advance of democratic institutions, the affirmation of human dignity, and the ultimate end of tyranny around the globe. 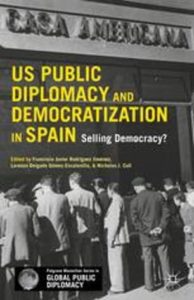 What former Secretary of State Condi Rice called ‘transformational’ diplomacy can make the difference in democratic transitions, as in Spain (right), observers suggest.

Concentration exclusively on the institutions of civil society is important but not sufficient for establishing stable democracy, argues Ukrainian analyst Iryna Sukhorolska. In this context, public diplomacy could become an effective instrument of influence on countries proceeding along the path of democratization.

The Community of Democracies, a global intergovernmental coalition that supports adherence to common democratic values and standards, is soliciting nominations for the 2019 Mark Palmer Prize, Freedom House reports:

The Mark Palmer Prize was established by the Community of Democracies in 2011 to honor diplomats whose work has advanced democracy and human rights. The award was inspired by the late US Ambassador to Hungary Mark Palmer—a longtime Freedom House trustee and vice chairman—who devoted his life to supporting democratic transitions in Hungary and in closed societies globally. The Prize has been awarded to diplomats from all over the world, including Peru, the Czech Republic, Lithuania, Canada, the Netherlands, and the United States. It seeks to honor individuals working tirelessly to defend democracy, human rights, and civil society.

The 2019 recipient of the Mark Palmer Prize will have done some of the following:

1. Demonstrated support for civil society’s right to freedoms of assembly, expression, and other principles as outlined in the Warsaw Declaration of the Community of Democracies.

4. Sustained efforts to support human rights, including actions that resulted in a release of prisoners of conscience, an end to cruel and inhuman punishment, or other tangible improvements.

7. Identified and articulated the importance of democratic values, despite working in a closed or authoritarian society.

8. Contributed innovative ideas and support for the consolidation of democratic institutions in countries in transition.

9. Upheld the idea of rule of law in countries where it is not practiced.

On May 10, the National Endowment for Democracy’s Christopher Walker testified before the U.S. House Foreign Affairs Committee on “Dollar Diplomacy or Debt Trap? Examining China’s Role in the Western Hemisphere.” On May 16, Walker testified before the U.S. House Permanent Select Committee on Intelligence on “China’s Foreign Influence and Sharp Power Strategy to Shape and Influence Democratic Institutions.”