Authoritarian states are attempting to exert influence through sharp power, which typically stems from ideologies that privilege state power over individual liberty and are fundamentally hostile to open debate and independent thought, according to Christopher Walker, vice president for studies and analysis at the National Endowment for Democracy, Shanthi Kalathil, the director of the NED’s International Forum for Democratic Studies, and Jessica Ludwig, a research and conferences officer at the NED’s International Forum.

Practice differs from regime to regime, but sharp power usually involves censorship and manipulation designed not to win over publics but to degrade the integrity of independent institutions, they write for Foreign Policy:

In order to understand something, you need to be able to measure it. As with attempts to quantify soft power, it will be challenging to develop precise measurements for sharp power. However, this should not stop analysts from trying. With the stakes so high for institutions critical to the health of democracy, better ways to assess sharp power are essential. In their absence, democracies will remain at a precarious disadvantage when it comes to responding to this corrosive form of power.

Meanwhile, examples of international airlines and other corporate entities being compelled to adopt Chinese government talking points with respect to Taiwan and other “sensitive issues” are becoming almost too numerous to count. 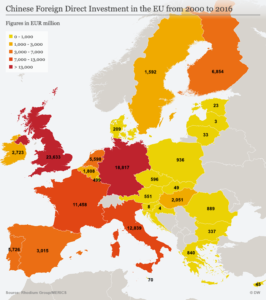 Chinese foreign direct investment (FDI) in Europe is now nine times greater than in the United States, notes Carnegie analyst Erik Brattberg. At the root of European scrutiny of Chinese investments is a concern that these are not guided solely by business imperatives but are rather part of a concerted state-driven strategy, he writes:

The predilection of Chinese investors for European companies with specialized technology has stoked fears that their purchases are really aimed at siphoning European know-how and at squeezing Western companies out of key industries as part of the “Made in China 2025” initiative. Another concern is the possibility of unwitting transfers of cutting edge or dual-use technologies. Compounding these other issues is the question of reciprocity for European companies in China.

As the world’s largest democracy that is also home to the world’s largest number of impoverished people, India is variously described as a model of soft power, or a country that makes remarkably poor use of it, notes Dhruva Jaishankar, a Fellow in Foreign Policy at Brookings India:

For some, its rich culture and democracy stand in contrast to other authoritarian and revisionist great powers, and indeed many Indian leaders speak positively about the country’s soft power potential. By contrast, as implied by its absence from The Soft Power 30 Index, India evidently does not yet benefit as much from international awareness, positive associations or investments in cultural diplomacy as many other countries.

“As a democracy with a rich culture and a modicum of principle in its international engagement, it has often benefited in real, tangible ways from its soft power,” Jaishankar adds. “Clearly though, it has its work cut out in better projecting its culture and values to international audiences.” RTWT

Strengthening democratic groups and institutions in other countries not only reflects the hopes and ideals of the American people, but also is rooted in universally recognized principles of international law, says the National Endowment for Democracy, marking International Democracy Day:

The Universal Declaration of Human Rights and other United Nations agreements (including the Conventions of the International Labor Organization), as well as the Helsinki Final Act, commit governments around the world to honoring the fundamental human rights that are guaranteed to citizens of the United States and other free societies. It is therefore in keeping with established international law for the American people, through an institution such as the National Endowment for Democracy, to help others build democratic institutions and strengthen democratic processes that will promote individual rights and freedoms. Explore the work of NED grantees striving for democracy and freedom around the world (above).