In the wake of the Afghanistan debacle, if democracies conclude military-backed liberal intervention in pursuit of democracy cannot work, will autocracies show the same self-restraint? The Guardian’s Patrick Wintour asks:

It was less that Afghans were not ready for democracy, but it was never possible in an insurgency for democracy to gain a foothold. The special inspector general for Afghanistan reconstruction found that “successes in stabilizing Afghan districts rarely lasted longer than the physical presence of coalition troops and civilians”. As a result, “getting to Denmark” – as Francis Fukuyama once described nation-building – requires time, expertise, resources and skills.

The American failure in Afghanistan was not a failure to build a Western-style liberal democracy, says Stanford University’s Francis Fukuyama. The underlying problem was more basic, the failure to create even a minimal state that could exercise some degree of authority over at least the urbanized parts of the country.

Many of the lessons learned from the prolonged occupations [of Iraq and Afghanistan] had to do with the difficulty of constructing sustainable political institutions, which were believed to be necessary to prevent the re-emergence of a terrorist threat. There were three possible objectives, he writes for American Purpose:

As it turned out, democracy-building was the easiest to accomplish, Fukuyama contends. Both Afghanistan and Iraq held elections, or “election-like events,” that selected political leaders on the basis of genuine political contestation. They were riddled with corruption and fraud, but nonetheless produced results that roughly reflected the will of the people in each country.

As two political scientists who, between 2004 and 2012, advised the U.S. State Department on institutional design in Afghanistan, we witnessed multiple missteps that helped seal Afghan democracy’s fate, say John M. Carey and Andrew Reynolds. At a very basic level, the founders of the new state chose the wrong governing institutions — ones that were either unsuited to existing power dynamics or that were intrinsically likely to foster division rather than compromise. These choices generated powerful incentives for a politics of individualism and factionalism rather than coalition building. All of this was well known, and noted, at the time, they write for The Washington Post.

The United States had unparalleled influence on the design of Afghanistan’s new democracy, so it bears considerable responsibility for these errors. It oversaw the creation of a highly centralized national government rather than investing in regional autonomy that better reflected conditions on the ground, Journal of Democracy contributors Carey and Reynolds add. RTWT

What does it mean —for America, for America’s allies, and for the world—when a liberalizing country falls victim to a tyrannical, misogynistic, autocratic movement? The Atlantic’s Anne Applebaum asks, offering an excellent reminder of something that many of us forget: Although Americans and our allies might be tired of wars, the Taliban are not. Nor are their funders in Pakistan, or the Russian, Chinese, and Iranian regimes that hope to benefit from their victory, adds Applebaum, a National Endowment for Democracy (NED) board member.

Do democracies have the strategic patience required to transform societies like Afghanistan? asks Jean-Marie Guéhenno, Director of Columbia University’s Kent Program on Conflict Resolution. Helping societies transform themselves is a generational undertaking. It is impossible to succeed in this if, as the saying goes, we have the watches and the enemy has the time, he writes for the European Council on Foreign Relations.

The United States tried to establish a stable democracy in Afghanistan because, having invaded in the national interest — to oust the Taliban and al-Qaeda  — it would have been irresponsible and self-defeating to leave a power vacuum behind, The Washington Post insists. The U.S. national interest and the promotion of democracy, or at least political stability, abroad are not so easily separated, any more than American interests have ever been determined without reference to American values.

The withdrawal from Afghanistan is likely to have both immediate and long-term effects on Europe, NATO, and relations between the transatlantic democracies, according to experts Rachel Ellehuus and Pierre Morcos in a contribution to the CSIS Afghanistan Aftershocks series. 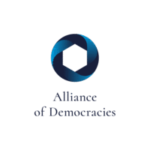 The world should not draw the wrong lessons from Afghanistan, according to Anders Fogh Rasmussen, founder of the Alliance of Democracies Foundation, a former NATO Secretary-General and former Prime Minister of Denmark. This fiasco was far from inevitable. It would also compound the folly if the world’s developed democracies stopped supporting the quest for freedom and democracy in authoritarian states and war-torn countries, he writes for Foreign Affairs. It took generations to develop sustainable democratic governments in Europe and North America.  But officials and publics in those countries too often expect fragile post-conflict societies to construct well-functioning democracies overnight.

President Biden’s foreign policy still calls for a return to protecting human rights and promoting democracy, but only when consistent with U.S. goals, The New York Times observes.

Retreat of the West?

The Afghan debacle marks the end, at least for now, of interventionism, of nation-building and of the construction of states along more liberal lines, argues Andrés Ortega, Senior Research Fellow at the Elcano Royal Institute. The West is pulling back from a certain type of operation as a means of defending interests, exporting freedoms and even its understanding of democracy.

The looming confrontation with China and Russia is being interpreted as a clash between political systems and ideologies. And so, liberal democracy and authoritarianism have once again become the dominant signifiers — and abandoning Afghans to the Taliban feels like a retreat from the very thing the West stands for, notes Nathalie Tocci, a visiting professor at Harvard’s Kennedy School and director of the Istituto Affari Internazionali.  But while the return of values to Western foreign policy should, of course, be welcomed, that does not mean we should return to the past. Gone are the days of democracy promotion through military interventions and nation building — as Biden’s foreign policy doctrine rightfully states, she tells POLITICO.

A proper lessons-learned process for Afghanistan should start with the right assumptions, argues Gerrit Kurtz, a research fellow at the German Council on Foreign Relations (DGAP). For many years, democracy promotion and building functioning state institutions were not the focus of the US-led engagement, as long-time Afghanistan analysts have noted. According to one meta-review, factors hampering efforts to improve governance were “entrenched patronage-based practices within government, a lack of buy-in from government, donor-driven top-down project design with little regard for the institutional requirements and demands of partner institutions, and lack of political will of the government, especially for decentralization,” he writes for Internationale Politik:

The other problematic assumption is that democracy, rule of law, and fundamental human rights were somehow inappropriate in a tribal society such as Afghanistan. They may look and work differently than in Western countries, but accountability of officials, public participation in policy-making, and basic protection of life and property are important for any society. Simply put, just because outsiders have a hard time understanding the norms, traditions, and tensions of a local society they should not assume people are happy living in a repressive system—nor that outsiders have all the answers for a better life. 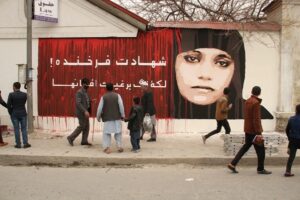 The face of Farkhunda Malikzada, publicly lynched by an angry mob in 2015, confronts Kabul citizens near the place of her murder.

The National Endowment for Democracy has supported Afghan civil society groups since 1984, its first year of operation, and remains committed to its partners at this perilous and consequential moment.

“We are standing in solidarity with our Afghan partners who have dedicated their lives to building a culture of democratic values in their country,” said Damon Wilson, NED president and chief executive officer. “We are committed to supporting those seeking to continue their work, even under these dire circumstances.”

Prime Minister Irakli Garibashvili noted that “about 2,000 people have already successfully completed transit. The appeal was from the International Republican Institute (IRI), the National Endowment for Democracy (NED) and others. And we have assisted in the temporary relocation of their staff.”

A great credit to #Albania – “one of Europe’s poorest nations, has committed to taking in up to 4,000 refugees from Afghanistan, more than any other country” [with] room & board covered by foreign groups like @NEDemocracy & @BBCYaldaHakim Foundation. https://t.co/pmOhltMHX6

Instead of promoting a common Afghan national identity, the US and its Western allies shied away from any action or language that might leave them open to accusations of cultural insensitivity, argues Nancy Qian, Professor of Managerial Economics and Decision Sciences at Northwestern University. Their fear was not unreasonable in view of the terrible cultural assimilation and eradication policies that Western countries have historically carried out domestically and overseas. But national identities need not be discriminatory or built coercively, she writes for Project Syndicate.

The world’s autocrats and sympathetic commentators are trying to take advantage of recent events to score ideological points.

Russian officials quickly seized the opportunity to use the withdrawal from Afghanistan as fodder for political messaging about failed U.S. nation-building, Mary Chesnut and Julian G. Waller write for the Belfer Center’s Russia Matters. On Aug. 20, President Vladimir Putin commented that “It is necessary to stop the irresponsible policy of imposing other people’s values from outside, the desire to build democracy in other countries, not taking into account either historical, national or religious characteristics, and completely ignoring the traditions by which people live…Any such socio-political experiments have never been crowned with success and only lead to the destruction of states, and the degradation of their political and social systems.”

China told the United States to reflect on Putin’s words and stop peddling American ideology and values to the rest of the world following the Afghan debacle, Newsweek reports. The withdrawal undermines the promotion of liberal democracy as a hegemonic norm, claims Valdai Club expert Glenn Diesen. 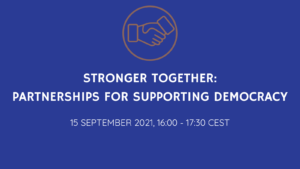 After Afghanistan: A discussion with the Brussels democracy support community.  Wednesday 15 September 12:00-13:00 (Zoom event – REGISTER HERE). This event is part of International Democracy Week 2021, a series of events taking place online from 15-17 September, around the theme ‘Stronger Together: Partnerships for supporting democracy’.