“Political parties or states need to reinvent themselves to be more appealing for young people to regain their trust and believe in democratic spaces like electoral processes and work on increasing the number of youth who participate in processes such as voting,” said Cynthia Chigwenya, the African Union’s southern Africa youth ambassador.

Some 70% of Africans believe democracy is the ideal form of government, according to a 2021 Afrobarometer survey.

For Dave Peterson, Africa director at the National Endowment for Democracy (NED), although the summit is long overdue, this moment is ripe for Africa to demand the U.S. “steps up” to deepen cooperation, VOA adds.

“Africans do have power to say we cannot be taken for granted,” he said. “Their position should be…if you want our support in the U.N., access to our resources or you want us to be part of the global conversation, then give us some reason to work with you.” 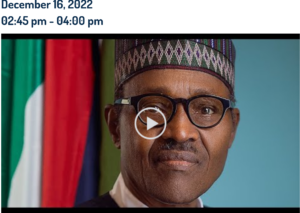 The Nigerian General Elections on February 25 will be one of the year’s most consequential, adds CFR expert James M. Lindsay:

Nigeria is Africa’s most populous, and in many ways most influential, country. So whoever wins Nigeria’s presidential election matters not just to Nigerians but to all of Africa and beyond. Term limits bar incumbent president Muhammahu Buhari of the All Progressives Congress (APC) Party from seeking reelection. So the APC has nominated Asiwaju Bola Ahmed Tinubu the former governor of Lagos, the country’s most populous state, as their candidate.

Join NED, USIP, the National Democratic Institute, the International Republican Institute, and the International Foundation for Electoral Systems for an in-person conversation with President Muhammadu Buhari of Nigeria. The discussion will reflect on the legacy of his administration, his leadership in bringing the Electoral Act of 2022 into fruition and his promise to leave a legacy of credible elections in which the Nigerian people will be free to choose their leaders.