Algeria‘s contentious presidential election campaign is highlighting the deep gulf between young people at the heart of a street protest movement and an ageing elite they see as clinging to power, Agence France Presse reports:

The poll, set for Thursday, will see five candidates, all of them linked to the 82-year-old deposed president Abdelaziz Bouteflika, compete for the top office. But the protesters, whose mass mobilization forced the ex-strongman to resign from his two-decade tenure in April, have rallied weekly to demand that sweeping reforms must come ahead of any vote.

Algeria’s first-ever presidential debate seems to have failed to persuade the country’s pro-democracy protesters to take part in next week’s election. The five candidates recited their platforms instead of sparring over ideas in the Friday night debate – and they didn’t even look at each other, AP adds: 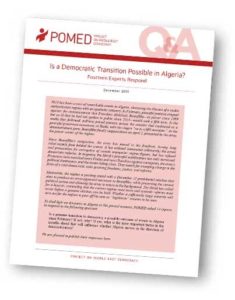 Members of Algeria’s 10-month-old protest movement shrugged off the exercise as a farce. They pushed out long-serving President Abdelaziz Bouteflika earlier this year and now want a whole new political system. They oppose the election altogether because it’s organised by Algeria’s power structure and they see the candidates as part of a corrupt and out-of-touch elite. Students plan new protests on Tuesday ahead of the first round of the election on Thursday.

“We saw five candidates answering like automatons, … as if it were an oral examination,” said journalism professor Djamel Mouafia. (HT: Qantara.de)

The grassroots opposition movement known as Hirak, whose peaceful nationwide marches led to Bouteflika’s resignation in April, are calling for a boycott. Hirak contends that deep reforms, including ending the military’s political control, are needed before any election takes place, the Project on Middle East Democracy adds.

Algerian authorities are cracking down on the Hirak protest movement which opposes holding the presidential elections scheduled for December 12, 2019, arresting hundreds of activists and imprisoning scores for protests or waving flags, said Human Rights Watch. 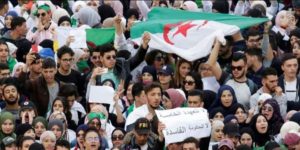 Since the campaign officially opened on November 17, at least eight protesters have been convicted and imprisoned and 15 others are in pretrial detention on the vague charges of “compromising the integrity of the territory,” “distributing publications harmful to the national interest,” or “calling for an unauthorized gathering,” it added.

“Millions of Algerians have shown through their sustained weekly protests over the past ten months that they believe in peaceful protest as a collective way to call for change, said Heba Morayef, Amnesty International’s Middle East and North Africa Director. “Instead of attacking peaceful protesters – including those opposing the presidential elections – Algeria’s authorities should be upholding the rights of Algerians to demonstrate peacefully and express themselves freely.” 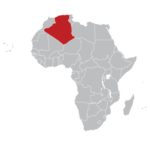 At this pivotal moment in the country, POMED – a partner of the National Endowment for Democracy – presents a new Expert Q&A, “Is a Democratic Transition Possible in Algeria?” Fourteen analysts with diverse perspectives respond to the following question:

Is a genuine transition to democracy a possible outcome of events in Algeria since February? If not, why? If yes, what is the most important factor that will influence whether Algeria moves in the direction of democratization in the months ahead?

Recent protests strongly express the widely held perception that the upcoming elections will only renew the system (le pouvoir) and anchor the survival of the military regime imposed on the country since 1962, notes Redouane Boudjemaa, Professor of Media and Communications at the University of Algiers.

Two prominent slogans sum up this refusal, across all the protests, “no election with the gangs”, highlighting the corruption of the regime, evident through the presence of the figures from the era of the resigned/removed president Bouteflika, he writes for the Arab Reform Initiative. The other slogan is, “Civilian, not a military, state”, meaning that the protesters demand the building of a civilian state, not a military one. It is this slogan that confirms the necessity of breaking with the militarization and securitization on which the political regime was built since Algeria’s independence from France in July 1962.

Algeria’s turmoil signals the possibility of a second Arab Spring, one observer suggests, noting that across the Arab world, an increasing number of citizens disagree with the “use of religion for political gain,” according to a recent YouGov survey: 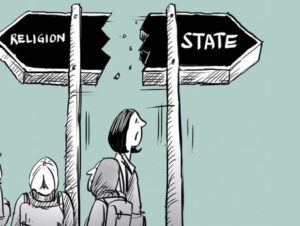 After nine months of peaceful protests, the Algerian Hirak continues to demand a fundamental change of the regime, rejecting the 12 December presidential elections as the regime’s solution out of the crisis, analyst Dris Nouri, a researcher and lecturer at Setif University, observes. In an unprecedented revolutionary context, what is at stake in the authorities seeking to reproduce the regime as quickly as possible and at the lowest cost? And what are the resources of the popular movement in resisting it?

Read the POMED Expert Q&A with responses from: