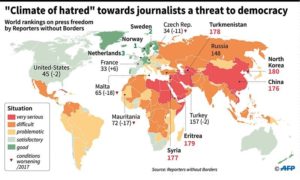 U.S. Global Media is the leading instrument of American soft power in authoritarian countries and struggling democracies, notes A. Ross Johnson, a history and public policy fellow at the Woodrow Wilson International Center for Scholars.

Missing from the Washington discussion is an examination of what these networks actually do, why their reporting is credible to their audiences and how it makes a difference. Audiences turn to U.S. Global Media for comprehensive fact-based news unavailable on local media, he writes for the Hill:

Independent fact-based information from outside that’s credible to local audiences is critical as local media are captured by governments and oligarchs and democratic achievements are reversed. But the power of U.S. Global Media depends entirely on its credibility, which rests in turn on its journalistic professionalism, editorial independence and clear separation from government. That credibility is threatened by provisions of the National Defense Authorization Act of FY2017 that provides for unprecedented executive branch control over the five networks.