Russia’s descent into corruption and the rise of Putin are a tale that has already been told in books, films, TV documentaries, and podcasts, from the BBC’s Ukrainecast to Tortoise Media’s Invaded: Voicemails from Ukraine. But now, with the invasion of Ukraine, it has a chilling new chapter, The FT’s Fiona Sturges writes. Another Russia is a new podcast presented by Ben Rhodes, former deputy national security adviser to Barack Obama, and Zhanna Nemtsova (above), journalist and daughter of Boris Nemtsov, the physicist, politician and outspoken critic of Putin who was shot dead outside the Kremlin in February 2015, she adds:

By focusing on Nemtsov, Another Russia finds a fresh path into a familiar story, reframing it via one man’s dissent. For Nemtsova, Russia’s corruption and geopolitical bullying are personal and her outrage in this podcast is palpable. She tells Rhodes she had two options after her father died: “Either to keep silent or to speak up. And I decided to speak up.”

My podcast Another Russia will premiere on July 25. We created with @brhodes for @CrookedMedia. Listen to the trailer https://t.co/sGWrKNenLY

British musician Sting interrupted a concert in Warsaw on Saturday evening to warn his audience that democracy is under attack worldwide and to denounce the war in Ukraine as “an absurdity based upon a lie,” AP reports. He asked a popular Polish actor, Maciej Stuhr, to come onstage to translate his warning that democracy is “in grave danger of being lost unless we defend it.” 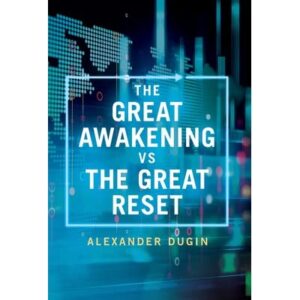 In his recent book, The Great Awakening vs the Great Reset , the Eurasianist Alexander Dugin opposes the “modern Western paradigm” composed of such elements as “democracy, liberalism, human rights, LGBT+, robotization, progress, digitalization and cyberspace”. The “Great Awakening” of his title is the dawning realization that the universal domination of the West, liberalism imposed by force, must now be seen as the main enemy of an alternative civilization – Russia – and defeated, notes former FT Moscow bureau chief John Lloyd.

The Bulgarian-born writer Ivan Krastev warned that “Putin genuinely believes that the Russians and Ukrainians are one people. He is not prepared to recognize the sovereignty of any of the neighboring states,” he told a forum hosted by the banned Russian NGO, the School of Civic Education, Lloyd writes for The New Statesman:

The Russian political analyst, Kirill Rogov, told the assembled journalists that even in exile, “we have to continue what we see as ‘our’ Russia when and where we can. Leaving allows us to do something which we can no longer do in Russia”. “Our” Russia for Rogov and others like him, is a country in which at least some of the basic democratic freedoms – crucially, freedom of speech and publication – are observed. Maxim Trudolyubov, a columnist and editor – who now works as a freelance since he was dismissed from his role as head of comment on the daily newspaper Vedomosti–  said that “we tried… to analyse Putin’s moves from a rational point of view. But increasingly, we understood that there was a shift of the Kremlin from reality to the creation of their own reality”.

Russia’s president would have the world believe that his country is guided by unifying ideas of cultural pride and conservative values, exceptionalism and splendid isolation, adds Peter Pomerantsev (@peterpomeranzev), the author of “This Is Not Propaganda: Adventures in the War Against Reality” and a senior fellow at Johns Hopkins University’s SNF Agora Institute. But in reality, Mr. Putin’s Russia has no coherent ideology; it’s just a mess of contradictions: It is Soviet nostalgia and a cultural arrogance that glorifies the Russian empire; it is a Russian ethnic and Christian Orthodox superiority that sits uncomfortably with what is supposed to be pride in being a patchwork of ethnicities and faiths, he writes for The New York Times:

Mr. Putin’s manipulation of the cycle of humiliation and aggression is integral to his psychological grip on Russia. That manipulation can look like legislating to criminalize opposition to the war while also appealing for solidarity in the fight against the West. As the impact of economic sanctions rolls across Russia, Kremlin propaganda has called for Russians to show how tough they are: Haven’t they survived great trials in the past? These calls for toughness can resonate — people can learn to define themselves through surviving pain to the point of getting a certain satisfaction from it

As Putin himself must now realize, [his] claims of Slavic indivisibility are both factually incorrect and dangerously misleading, notes Taras Kuzio, a professor of political science at the National University of Kyiv Mohyla Academy and the author of “Russian Nationalism and the Russian-Ukrainian War.” In reality, Ukrainian society has always embraced a range of values that diverge dramatically from the imperial instincts shaping Russia’s own sense of self. These differences can be traced back hundreds of years and have become significantly more pronounced since the collapse of the USSR, leading to the development of two very different post-Soviet states, he writes for StopFake: Russian fascists’ intellectual prophet is Ivan Ilyin (right), a thinker of the early 20th century who was sent into exile by the Bolsheviks in the 1920s and embraced fascism in Italy and Germany. Ilyin saw fascism as a “necessary and inevitable phenomenon… based on a healthy sense of national patriotism,” The Economist observes:

Ilyin’s book, “Our Tasks”, was recommended by the Kremlin as essential reading to state officials in 2013. It ends with a short essay to a future Russian leader. Western-style democracy and elections would bring ruin to Russia, he wrote. Only “united and strong state power, dictatorial in scope and state-national in essence” could save it from chaos.

The Ilyin work Mr Putin is said to have read and reread is “What Dismemberment of Russia Would Mean for the World”, written in 1950. In it the author argues that Western powers will try “to carry out their hostile and ridiculous experiment even in the post-Bolshevik chaos, deceptively presenting it as the supreme triumph of ‘freedom’, ‘democracy’ and ‘federalism’…. German propaganda has invested too much money and effort in Ukrainian separatism (and maybe not only Ukrainian)”.