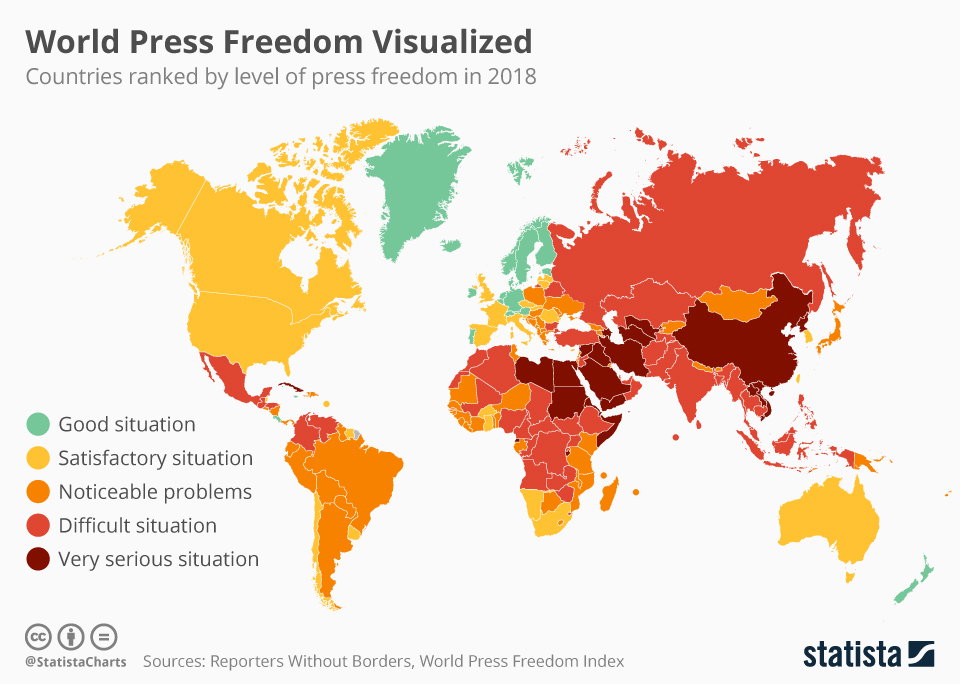 Authoritarian leaders are encouraging hostility toward journalists and promoting post-truth politics, disinformation and fake news according to the 2018 World Press Freedom Index.

Hatred of journalism threatens democracies, said Reporters Without Borders (RSF), which warned of “a highly toxic anti-media discourse that drove the world into a new era of post-truth, disinformation and fake news.”

The emergence of “strongman” populist politics, stoked by Russia, was threatening freedoms in Europe, the region where they were once robust, said the group, launching its 2017 rankings at an event co-hosted by the Washington Post.

“Political leaders who fuel loathing for reporters… undermine the concept of public debate based on facts instead of propaganda,” RSF chief Christophe Deloire told Agence France-Presse. “To dispute the legitimacy of journalism today is to play with extremely dangerous political fire,” he added.

“We see it in authoritarian countries, but alarmingly we also see the impact in democratic ones, too,” said Margaux Ewen, the North America director for RSF.

Hostility towards the media is “no longer confined to authoritarian countries such as Turkey and Egypt,” but was poisoning the political climate in established democracies. “More and more democratically elected leaders no longer see the media as part of democracy’s essential underpinning, but as an adversary to which they openly display their aversion,” the report said.

The report especially cites China’s model of media suppression, which has been exported to and duplicated by many countries under authoritarian rule in Asia, RFA adds.

“The past year up to now has been like no other for RFA,” RFA President Libby Liu said. “Authoritarian strongmen in Asia – who rule countries to which RFA broadcasts – have shown little, if any, restraint in targeting RFA journalists and sources, as well as their families and loved ones.

“Many floors below the surface of journalism there are bedrock attitudes that make the practice possible—and thinkable,” he writes for the NYRB. “For example: the belief in informed consent, or that information sources independent of the state are needed to monitor the state. There is a risk of erosion there.”