The mantra of the Arab Spring is back. Protesters in Algeria, Iraq, Jordan, Lebanon, Morocco, Tunisia and the Palestinian territories [and Sudan] have demanded better governance of late, prompting talk of an Arab-Spring sequel. But the context could not be more different, the Economist reports:

The wars and chaos that followed the Arab spring [featured in the NED’s Journal of Democracy] have cooled the ardour of activists and their regional patrons. Meanwhile, autocrats have sharpened their tools of repression in order to quash protests at home and stop those elsewhere from spreading. “They have rewired the entire region trying to prevent another Arab spring,” says Marc Lynch of George Washington University.

The resurgence of the security state amounted to an Arab Thermidor, said analyst Steven Heydemann. 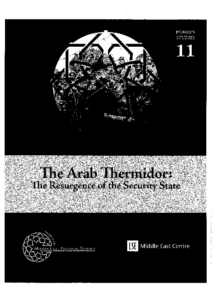 There is nobody to take their demands to the regime, and negotiate a transition to a more democratic system — or to manage the protesters’ expectations of the nature of such a transition. Without leaders, the protesters’ only means of forcing change is to keep protesting, and to keep demanding more.

“The evolution of demands is characteristic of a leaderless revolution,” says Geoff Porter of North Africa Risk Consulting. “If there’s nobody to tell you what’s possible, you can believe that anything is possible.”

The eruption of recent two protest movements reveals a strong demand for democracy, another analyst notes.

“While the purpose of the Arab Spring appeared to have been defeated in 2011, this new wave proves that the demand for freedom and justice is still strong among the people of the region,” writes Chatham House Middle East expert Dr Georges Fahmi. “In fact, opposition forces in both Sudan and Algeria, have the advantage of looking at other experiences of regime change over the past eight years to learn from their mistakes.”

But civil society activists still need to learn how to make the transition from protest to politics, observers suggest.

“Somebody needs to be having a conversation with the government about what is acceptable and what is not,” says Brian Klaas, an expert in democracy at University College of London. Bringing down the regime makes for catchy slogans, but it’s not a practical negotiating position. The experience of the Arab Spring movements demonstrates that “they need to be working on compromises,” Klaas tells Bloomberg. “Removing the infrastructure of the regime overnight is not a great idea, so they should be talking about who has to go and who gets to stay.”