Ukraine votes for a president on March 31. Will the pro-Western incumbent, Petro Poroshenko, win? Or will he lose to his old foe, Yulia Tymoshenko, or wild card Volodymyr Zelenskiy? Carnegie Endowment experts ask (above).

A week before the election, the order of the top trio appears to be solidifying, the Election Watch project* reports. 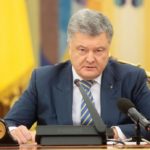 Instead of drawing a line under corruption and setting new rules, Poroshenko (right)  has proven to be a representative of the old system, using Russian aggression to whip up patriotism, says Balázs Jarábik, a nonresident Carnegie scholar.

“Ukrainians are united when it comes to Russia,” he observes. “But the policy of so-called Ukrainianization (promoting Ukrainian language and culture in public life), combined with economic decline, has deepened distrust toward the central government particularly in the most affected southeast regions, as well as among young people across the country.”

“Against this backdrop, Zelenskiy’s unorthodox approach appears refreshing,” Jarábik adds. “Instead of making promises, he says he focuses on listening and crowdsourcing ideas.” 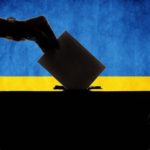 Ukraine has now entered its sixth year of a war of Russian aggression, Steven Pifer and William B. Taylor observe. The continued fighting in the Donbas makes adopting reforms much more difficult, they write for the Atlantic Council’s Ukraine Alert:

Indeed, that is one reason why the Kremlin keeps the conflict simmering. Moscow does not want Ukraine to succeed. But the war with Russia does not make reform impossible; in fact, it makes reform even more important. The war is not an excuse for foot dragging.  By adopting economic and political reforms, Ukraine becomes better able to resist Russian pressure.

Moscow has long exploited Ukraine’s far-right movements as scarecrows, inflating their political importance, in an effort to discredit the Ukrainian nation, as a whole, says analyst Andreas Umland. But in reality, ultra-nationalist parties in post-Soviet Ukraine have struggled to find support for several election cycles now. If the various groups cannot unite, they are likely to fail once again in the 2019 parliamentary elections, he writes for New Eastern Europe.

*The Election Watch project is supported by the National Endowment for Democracy.