Nikol Pashinyan’s government, which came to power as a result of Armenia’s Velvet Revolution, has the best chance in the state’s newly independent history of bringing about a sustainable democratic transition, experts told a Helsinki Commission hearing (above) in the US Congress yesterday. 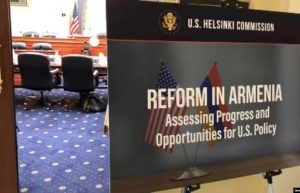 After peaceful mass protests deposed the ruling party after more than two decades in power,  opposition leader Pashinyan rode the wave to a landslide victory in December’s national elections, the Commission reports. Voters gave his My Step alliance two-thirds of seats in parliament, with a robust mandate to follow through on commitments to anti-corruption, democratic governance, and economic growth.

“Armenia’s Velvet Revolution is an authentic democratic breakthrough, a historic opportunity to build a more just system.  No event since Armenia acquired its independence in 1991 is of similar significance,” said Miriam Lanskoy, Senior Director for Eurasia with the National Endowment for Democracy:

The philosophy of the new leadership is to avoid dramatic change and they point correctly to mistakes and abuses during transitions elsewhere.   Instead, they believe that they can make the existing system work better through better practices.  No serious analyst questions their motives or their values — this debate is largely about the strategy and speed of reform.

But Armenia confronts a “central dilemma,” she added: “Can the good people now in government achieve their admirable goals without first undertaking systematic institutional restructuring?”

Pashinyan and his My Step party remain very popular only one year into a five-year term, and  Armenians understand that the government is trying to solve problems that it did not create, that have accumulated over two decades of authoritarianism and kleptocracy, Lanskoy told the hearing.

“However, the oligarchic disinformation machine is waiting patiently for the new government will fail to deliver so that at some future point they might exploit this government’s mistakes or unfulfilled promises to engineer a comeback,” she observed. “The lessons from attempted democratic transitions elsewhere in Eurasia are clear, backsliding has occurred frequently, and to ward off that possibility tangible improvements must materialize rapidly lest public trust erodes and authoritarians return to power.”

This democratic opening presents an historic opportunity to advance crucial reforms, the hearing was told. U.S. assistance is already helping to consolidate Armenia’s democratic institutions and there are Congressional calls to double this aid, the Commission observed.

Civil society will play a critical role in the country’s transition, according to a recent book, Armenian developments : perspectives of democratization and the role of the civil society, edited by Wolfram Hilz and Shushanik Minasyan.

“The Armenian experience underscores that protests are not merely fleeting outbursts that relieve the pressure on a dysfunctional system. . . . they  generate leaders, encourage young people to keep questioning the political elite, and foster collaboration among members of civil society,” the NED’s Lanskoy and Elspeth Suthers observed in the April 2019 issue of the Journal of Democracy.

The following additional witnesses were scheduled to participate in the hearing on “Reform in Armenia, Assessing Progress and Opportunities for U.S. Policy” :