Censorship and punishment have muted dissent in China since Mr. Xi came to power six years ago. So Xu Zhangrun, a law professor at Tsinghua University in Beijing, took a big risk last week when he delivered the fiercest denunciation yet from a Chinese academic of Mr. Xi’s hard-line policies, revival of Communist orthodoxies and adulatory propaganda image.

“People nationwide, including the entire bureaucratic elite, feel once more lost in uncertainty about the direction of the country and about their own personal security, and the rising anxiety has spread into a degree of panic throughout society,” Professor Xu wrote in an essay that appeared on the website of Unirule Institute of Economics, an independent think tank in Beijing that was recently forced out of its office…..The essay appeared as a burst of troubles has given a focus for criticisms of Mr. Xi’s strongman ways, and it has spread through Chinese social media, despite censors. Other less damning criticisms, petitions and jibes about Mr. Xi’s policies have also spread, often shared through WeChat, a popular social media service.

“Xu has written a challenge from the cultural heart of China to the political heart of the Communist Party,” said Geremie R. Barmé, an Australian scholar of China who is translating Mr. Xu’s essay. “Its content and culturally powerful style will resonate deeply throughout the Chinese party-state system, as well as in the society more broadly.”

When Xi Jinping laid out his plan for his country’s role as a global leader, he was careful to frame his ambitions as goals to be achieved some years down the road. He needn’t be so modest where political repression is concerned. Among major world powers, China is already number one, writes Freedom House analyst Arch Puddington.

Recently, a group of Liu’s supporters announced the recipient of the Liu Xiaobo Conscience Award, an honor given to commemorate his example and to remind the world of the plight of those who have followed in his footsteps as a champion of democracy, he adds: 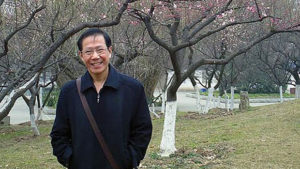 There were nine finalists for the prize, all current or recent political prisoners. The winner is Qin Yongmin (left), a human rights activist who, earlier this month, was given a 13-year prison sentence by a court in Wuhan. Prior to his sentencing, he endured an enforced disappearance, two years of pretrial detention, the persecution of his wife, and a total denial of due process rights. His lawyer withdrew from the case to avoid being punished by the authorities himself, a practice that has proliferated under Xi’s leadership. RTWT