Zimbabwe’s opposition says its candidate, Nelson Chamisa, has won Monday’s presidential election. The MDC Alliance says the ruling Zanu-PF party is attempting to rig the vote to allow President Emmerson Mnangagwa to win, and the delay in releasing official results is unacceptable. The election commission has said there has been no cheating and it needed time to collate the votes, the BBC reports.

Civil society groups are working on a court application to force the electoral commission to get all polling stations to publish results, Tendi Biti, a senior official from the opposition MDC party, said on Tuesday, Reuters adds.

Tensions are rising as opposition fears that the election count will be rigged intensify, monitors warn of possible violence if the results are contested, and authorities brace for protests, the Guardian reports.

“The fear is that people are going to be disgruntled to the point where they go into the streets and then there is a worry what the response will be from the security forces in the country,” said Andrew Makoni, of the Zimbabwe Election Support Network (ZESN), a coalition of civil society groups that deployed 6,500 monitors during the poll.

Millions of Zimbabweans waited in line for hours on Monday to vote in a historic election that, for the first time since the nation’s independence from Britain in 1980, did not include former President Robert Mugabe on the ballot, The LA Times adds:

With observers expecting a high turnout, voters embraced the chance to cast their ballots in an atmosphere that they said was peaceful, after years of elections marred by intimidation, violence and fear. The two candidates vying to lead Zimbabwe into its post-Mugabe future are President Emmerson Mnangagwa, the 75-year-old war veteran nicknamed the “Crocodile” who took over when Mugabe was ousted in November, and Nelson Chamisa, the 40-year-old opposition leader whose supporters compare him to Barack Obama. 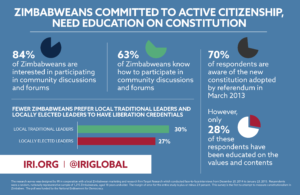 “There have been no incidents of violence, and it’s been quite orderly,” said Lizwe Jamela, the programs manager for Zimbabwe Lawyers for Human Rights, a civil society group helping monitor the polls.

The election “appears to be one of the most credible electoral processes we have seen for over a decade in Zimbabwe,” said Nicole Beardsworth, a postdoctoral researcher at the University of York in the U.K. who was in Harare for the vote. “However, it is important to note that it is at the tallying, collating and reporting stage of the vote that things can still go drastically wrong,” she told The Wall Street Journal. 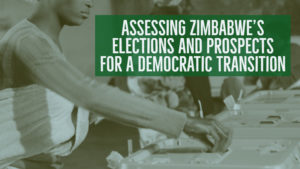 Liberia’s former President Ellen Johnson Sirleaf, who was monitoring the poll on behalf of the US-based National Democratic Institute, told the BBC that Monday’s long queues showed Zimbabweans were enthusiastic about voting, without any kind of repression.

Mnangagwa would prefer not to rig the election, but if he sees it as the only path to stay in power, he will, likely at the point where vote tallies are consolidated, says Council on Foreign Relations analyst john Campbell:

If the election is close and there is a runoff, Mnangagwa is likely to take the gloves off and the possibility of violence increases. The bottom line is that Mnangagwa will probably be the next president of Zimbabwe, by hook or by crook. If, through an unforeseen development, Mnangagwa fails in the election, the military will ensure that the next president of Zimbabwe protects its interests.

D-Los Angeles), who is in Zimbabwe as a co-leader of the joint observer mission of NDI and the International Republican Institute told the LA Times  she saw some polling stations that were “very well organized” and others where things “were not as orderly.”

She said that voter turnout appeared to be huge.

“Even in the remote polling places, there were lines,” said Bass, a board member of the National Endowment for Democracy. “People seemed very committed to their participation.” But, she added, “somebody has to lose.” 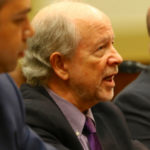 Election officials have failed to fully satisfy observers and the opposition of the integrity of the voter rolls — a problem in a country with a history of “extremely deficient” voter rolls, said NDI’s Patrick Merloe (right) told The New York Times:

Election officials argued that they were not constitutionally required to show evidence of how the voter rolls were compiled.

“Things have been done that are maybe in compliance with the law but certainly aren’t providing that great deal of confidence,” said John Tomaszewski, an IRI observer.