A little more than a decade after the Arab Spring swept away many autocratic regimes in the Middle East and plunged others into chaos, a new authoritarian order is settling over the region, says Carnegie Middle East Center’s Maha Yahya.

This is partly a story of authoritarian backlash. Alarmed by unprecedented scenes of citizens taking to the streets to demand their rights, the autocratic regimes that survived the first wave of the Arab Spring cracked down on those who joined pro-democracy protests and offered handouts to win over those who were considering doing so, she writes for Foreign Affairs:

Once again, citizens in the Middle East are being asked to choose between freedom and stability. But unlike the last generation of Arab autocrats, who could at least claim to offer economic and social benefits in exchange for political obedience, the new crop of authoritarian leaders can promise neither prosperity nor stability. Faced with increasing economic headwinds, some owing to the pandemic and others to unfavorable long-term energy and climate trends, Arab states are increasingly incapable of holding up their end of the authoritarian bargain.

Hollowed out by corruption and mismanagement and buffeted by adverse economic conditions, authoritarian governments in the Middle East are struggling to deliver the socioeconomic benefits that once pacified their publics, Yahya observes.

Putin’s war demonstrates the flaws of autocracy, notes one observer. But it will also teach us that authoritarianisms are here to stay, which means that there will be no unified world system in the foreseeable future, and that democracies will have to develop stable and encompassing multi-resilience strategies to deal with systemic rivalries in the long term. 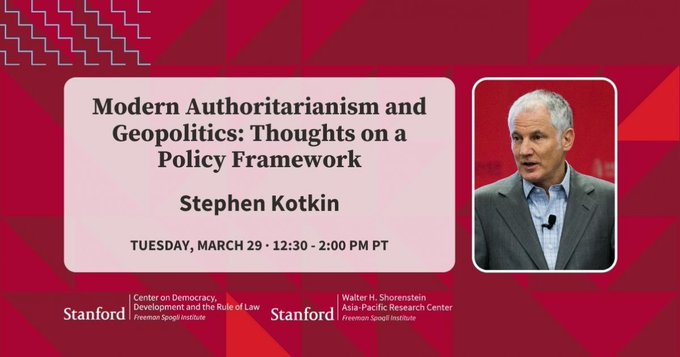 Once upon a time, there was a seductive story about twin revolutions, a political one in France and an industrial one in Britain, that supposedly ushered in our modern world, Stanford’s Freeman Spogli Institute writes. This narrative never sat well with empirical realities, yet it lives on in textbooks. What might be a more persuasive framework for a global history of the modern era? FSI hosts a discussion with Stephen Kotkin, the John P. Birkelund Professor of History and International Affairs at Princeton University, and author of two volumes of a three-volume biography of Stalin. Moderator: Kathryn Stoner. Online, via Zoom. Tuesday, March 29, 2022 | 12:30 PM – 2:00 PM (Pacific). REGISTER. 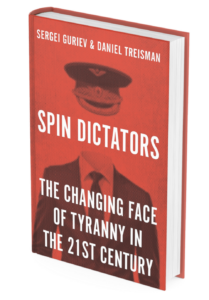 In his new book, Spin Dictators: The Changing Face of Tyranny in the 21st Century, UCLA’s Daniel Treisman traces how leaders such as Singapore’s Lee Kuan Yew and Peru’s Alberto Fujimori pioneered less violent, more covert, and more effective methods of monopolizing power, Stanford’s Freeman Spogli Institute adds. They cultivated an image of competence, concealed censorship, and used democratic institutions to undermine democracy, all while increasing international engagement for financial and reputational benefits. The book reveals why most of today’s authoritarians are spin dictators—and how they differ from the remaining “fear dictators” such as Kim Jong-un and Bashar al-Assad, as well as from masters of high-tech repression like Xi Jinping.