The @NDI‘s global family mourns the loss of democracy icon Madeleine K. Albright/@madeleine.
Thank you, Madame Secretary/Madame Chair, for your leadership & commitment to democracy & human dignity you embodied for generations around the globe.
We love you!https://t.co/ah1UKzwwtQ pic.twitter.com/SBXfbJoK2e

Madeleine Albright, the first woman US secretary of state, who helped steer Western foreign policy in the aftermath of the Cold War, has died of cancer. She was 84 years old, CNN reports:

Albright was a central figure in President Bill Clinton’s administration, first serving as US ambassador to the United Nations before becoming the nation’s top diplomat in his second term. She championed the expansion of NATO, pushed for the alliance to intervene in the Balkans to stop genocide and ethnic cleansing, sought to reduce the spread of nuclear weapons, and championed human rights and democracy across the globe.

She anticipated the current authoritarian resurgence in prescient comments at a 2016 National Endowment for Democracy (NED) tribute to Vaclav Havel, noting that the democratic West “in the twenty-five years since the end of the Cold War, grew too complacent and too confident that the democratic tide would rise simply because history was on our side.”

“We underestimated the tenacity of our opponents, and we did not pay enough attention to the admonitions of Vaclav Havel, who urged us in that speech to Congress to treat the Cold War’s end not as the conclusion of a bitter struggle but as the beginning of a new and even greater challenge,” she added.

Below is a statement from the family of @Madeleine: pic.twitter.com/C7Xt0EN5c9

“Her story — a story of fleeing Czechoslovakia as a refugee at a young age and rising in the highest levels of the U.S. government — has echoed in my mind amid the current crisis in Ukraine,” said U.S. Ambassador to the United Nations Linda Thomas-Greenfield. “I hope to do justice for her memory today. I’m sure that we will have an opportunity to remember Secretary Albright and honor her many contributions in the days ahead. But today, I grieve her as my friend and extend my condolences to her family.”

Albright described the US as the “indispensable nation” for employing diplomacy backed by military prowess to defend democratic values around the world. “We stand tall and we see further than other countries into the future, and we see the danger here to all of us,” she said in 1998.

As Secretary of State, “I will do my best to talk about foreign policy not in abstract terms, but in human terms and bipartisan terms,” she said. “I consider this vital because in our democracy, we cannot pursue policies abroad that are not understood and supported here at home.” 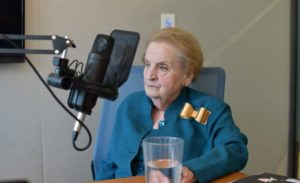 Following her tenure as secretary of state, Albright served as chairwoman of he National Democratic Institute (NDI) from 2001 to her death.

“It took me a long time to find my voice. But having found it, I’m not going to shut up,” Albright said. “I’m going to use it to the best of my ability in terms of making sure that democracy is our form of government and that those around the world that want to live in a democracy have a possibility to do so.”

NED President and CEO Damon Wilson was a junior State Department official when Albright finalized the agreement for NATO enlargement. 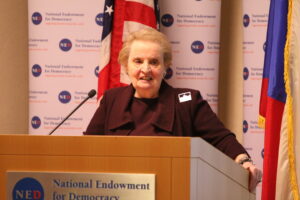 “Secretary Albright described herself as ‘an optimist who worried a lot’ as she was clear-eyed about the threat from autocrats like Vladimir Putin, but confident that democrats around the world would summon the will to renew democracy,” he said in response to her passing. “We honor her legacy by doubling down on our efforts to push back on tyranny – beginning by helping to ensure that Ukraine’s extraordinary resistance marks a turning point in favor of freedom.”

NED Chairman Kenneth Wollack worked closely with Albright as president of NDI for 25 years. “To Madeleine, democracy was about values and principles and she believed that national security advances when these things intertwine,” he observed. “She was a forceful advocate for those values and principles because they had concrete meaning in her own life. Her family twice escaped the country of her birth to secure not only physical safety but personal freedom.” (Read his full statement here.

Albright served on the NED Board of Directors from January 1991 until January 1993, when she was nominated by U.S. President Bill Clinton to serve as the U.S. Ambassador to the United Nations, and later as Secretary of State, the first woman to hold that position. NED honored her in 2012 with its Democracy Service Medal.

Damon Wilson, executive vice president of the Atlantic Council, was a junior desk officer at the US Department of State when then US Secretary of State Madeleine K. Albright travelled to Missouri to finalize the new enlargement. #NATOat70https://t.co/U4Z9z39akw

In a Foreign Affairs essay published last year, she called on the U.S. to lead a global democratic renaissance:

Madeleine K. Albright, the 64th U.S. secretary of state and the first woman to hold that office, died on Wednesday at age 84.

In an essay written last year for Foreign Affairs, she called on Washington to lead a global democratic revival:https://t.co/HIWmTvmvTX

Born Marie Jana Korbel in Prague on May 15, 1937, She was the daughter of a diplomat, Joseph Korbel. The family was Jewish and converted to Roman Catholicism when she was 5. Three of her Jewish grandparents died in concentration camps, The WSJ adds.

After being informed late in life that she was Jewish and that many members of her extended family had perished in the Holocaust, she said: “I have to say that I’m very proud of the way I lived my life . . . I think if you look at my works, that I have comported myself in a way that is very much in line with somebody who has known repression and what it’s like to be a victim of totalitarianism.”

RIP @NDI chair @madeleine Talked about foreign policy “not in abstract terms, but in human & bipartisan terms… because in our democracy, we cannot pursue policies abroad that are not understood and supported here at home.” https://t.co/26SrtGLfAG