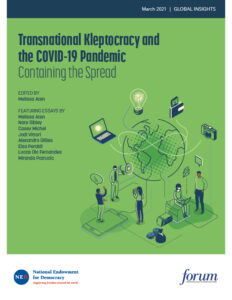 Democratic states should consider the potential of illicit groups for autocratic states as a tool in the competition framework and initiate cross-border policies to prevent transnational organized crime (TOC) involvement in strategic competition, argues a new report.

Non-State actors will play a much bigger role in strategic competition and non-Democratic states will be more likely to use TOC groups in the competition environment because their political regime structure allows them to work with illicit actors, Cüneyt Gürer contends in Strategic Competition: International Order and Transnational Organized Crime, an analysis for the The George C. Marshall European Center for Security Studies:

A recent Foreign Affairs analysis5 indicates that China and Russia have weaponized corruption and used it as a “core instrument of national strategy exploiting democratic countries’ vulnerability to this kind of malign influence.” This type of influence is observed also towards weaker and less democratic countries directly and through non-State actors such as TOC groups or proxy forces in conflict situations.

Already, established structures and connections between illicit groups and non-democratic states create an opportunities for competing states to use TOC groups for their advantage, Gürer warns. RTWT

The COVID-19 pandemic exacerbated corruption risks around the world, but it also generated opportunities for civil society to gain leverage  against transnational kleptocracy, according to a recent report from the International Forum for Democratic Studies (above). Civil society activists, journalists, academics, researchers, donor groups, and policy makers assess the intersection between COVID-19 and transnational kleptocracy, and how civil society and independent media can respond to challenges posed by the pandemic.